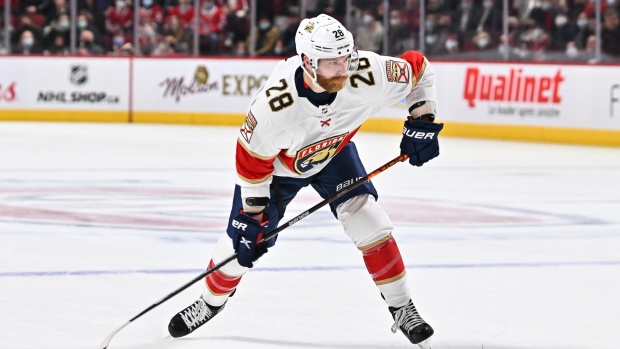 The regular season feels like an eternity. But now, with the end in sight, it’s hard not to feel a tad wistful. Days offering ten or more games will soon be over. Half of the teams in the league will be rendered irrelevant. Still, we have several more weeks to enjoy. This Saturday, we zero in on a few games where the spunky underdog gets clocked by the playoff-bound squad.

The Ottawa Senators want to be taken seriously. Coming fresh off a win where they played spoiler against the Winnipeg Jets, the Senators showcased that they could foil Winnipeg’s playoff hopes with a north-south, power game.

The Senators tested the Jets’ defensive acumen by challenging them to take away their sticks and box them out in the paint, and they utilized the low-to-high play with their defencemen. Perhaps most importantly, the Senators carried over a good habit showcased in a previous loss against the Islanders: better gap control and puck support.

Against the Jets, the Senators’ tighter gaps helped them generate counterattacks and maintain offensive zone possession. Ottawa may also welcome back right-winger Drake Batherson, who was scoring at an over-a-point-a-game pace before his injury. Ottawa is frisky.

Sadly, Ottawa is facing an opponent equipped to dismantle a lively underdog. With Claude Giroux now in the mix, the Panthers’ available top nine are the best in the East and arguably the NHL.

Giroux made his debut on Thursday night with Aleksander Barkov and Carter Verhaeghe, and while they were adapting to each other, the trio still generated offence almost at will.  They outshot Montreal 10-2 at 5-on-5 and tripled them in high-danger chances. They scored a goal and could have notched multiple tallies. With the Senators playing without Thomas Chabot, I struggle to envision how they stymie Florida.

Even if Ottawa can’t contain Florida’s offence, I can highlight how it will try. The Senators have received much better puck support from their third forward high, and they will be looking to eliminate the Panthers’ speed through the middle of the ice. Even though the Senators play man-to-man defence in their end, they will collapse down low and leave the points open in their zone.

Florida generates so much pressure with its cycle in the bottom half of the offensive zone that the tension of Ottawa’s wings sagging to aid their defencemen and center while not abandoning their responsibility toward the Panthers’ defenceman will be tricky. Against the Canadiens, the Panthers’ defencemen were finding the shooting lanes, and Florida capitalized on the Anthony Duclair goal. That said, the Panthers are missing Aaron Ekblad, which gives the Senators a little relief.

Perhaps the most fascinating storyline to watch in this contest is how each team stretches the ice. In the Canadiens game, the Panthers could fly the zone and utilize the stretch pass to manufacture breakaways. Conversely, Montreal was able to gin up solo looks on goaltender Spencer Knight by stretching the ice and taking advantage of Florida’s aggressive offensive posture on the cycle. Ottawa’s Alex Formenton, Mathieu Joseph and Connor Brown are three players they should look to use for a home-run pass to get behind the Panthers’ defencemen.

Goaltending is a very difficult part of this game to assess. If the Senators start goaltender Anton Forsberg, they can keep this game close. Since February 1st, only six goaltenders have a better Goals Saved Above Expected (GSAx). But Florida has two nice options in goal, and if Sergei Bobrovsky doesn’t return, Knight has been stellar of late. If Ottawa starts Filip Gustavsson, Florida could light him up and have the edge.

In the last two months, the Senators have won consecutive games twice. Florida may be the best team in the NHL, and even with their uneven road record, I think they take care of business in regulation.

The remainder of the regular season is extremely important for the Wild. They are slightly in front of the St. Louis Blues for the No. 2 spot in the Central Division, and the Nashville Predators are not far behind. The Wild, Blues and Predators have all been much better at home than on the road. Home-ice is coveted by Minnesota, which is perennially superior in the Xcel Energy Center. Ergo, this game matters.

Saturday’s matchup will be determined by what happens in each team’s defensive zone. One characteristic that makes the Wild hard to contain is that they use a ton of motion on offence to get separation. With gobs of skill at forward and a mobile defensive group, the Wild will look to use give-and-go’s, backdoor cuts, crisscrosses, and interchanges to scramble an opponent’s defence.

Against Chicago last Saturday, the Wild ran different variations of a set play off the opening faceoff in the neutral zone. In an effort to spring Kirill Kaprizov, the Wild used a bumper man to pop a pass to Kaprizov running off a curl. The Wild are fast, and they can pass, and unfortunately for their opponents, they know it.

For Columbus, this is a problem. The Blue Jackets’ defensive coverage expects them to be able to defend one-on-one, but the personnel isn’t always capable. Against the Penguins on Tuesday night, Pittsburgh had a lot of success winning individual matchups, causing the Columbus defensive coverage to collapse like a dominos set. With Boone Jenner injured, Jack Roslovic and Cole Sillinger are playing No. 1 and No. 2 center, and Pittsburgh seemed delighted by this fact.

The Minnesota cycle is one concern, but so is how the Wild attack off the rush in layers. Columbus struggled with puck management against Pittsburgh, and how the Blue Jackets track their man in transition defence will be critical. Against Pittsburgh, the Blue Jackets had trouble making timely defensive reads when the puck went behind the goal line, and their adversary’s scoring chances proliferated. This is especially distressing because the Wild loves to use the area behind the net as a playmaking spot.

But all is not lost for Columbus, as there are certain tactics it can employ to gash Minnesota. First, the Wild are very aggressive in the offensive zone. Three forwards and a defenceman can sometimes be found below the tops of the circles, leaving only one defender back at the point. The Blackhawks seized on the lone defender and used a flip pass to spring Boris Katchouk for a breakaway on Saturday.

Second, the Blue Jackets are formidable off the rush, especially when they can carry the puck in on the zone entry and stall to let the play develop. In the Blue Jackets’ win last Saturday, the Blues gave Columbus too much time on entries, allowing the puck-carrier to slip a pass to the outside lane opening up.  If Minnesota isn’t aggressive defending and fails to shrink space on the entry, Columbus will find traction.

Of course, I am bearish on the Blue Jackets’ competency to pull this off. They are a bad road team and will be playing in the second game of a back-to-back. They also are missing key players. With goaltender Marc-Andre Fleury on the roster, Minnesota possibly has plugged a big weakness, adding heft to its Stanley Cup viability. The sportsbooks don’t quite buy Minnesota as a contender in the West, but I sure do. I will gobble up Minnesota in regulation.

On March 7th, the Kings beat the Boston Bruins 3-2 in overtime. But it proved to be a Pyrrhic victory. Los Angeles lost its top defensive pair of Drew Doughty and Mikey Anderson and had to quickly suit up a defensive group comprised of players with little-to-no NHL experience. In the subsequent eight games, Los Angeles has gone 3-3-2.

But the poor record belies some of the underlying metrics. Without Doughty and Anderson, the Kings are posting nearly identical numbers in expected goals and high-danger chances. When homing in on the offensive and defensive metrics, the offence is driving the Kings’ positive play before and after the injuries. So, why the lacklustre record?

One thing that jumps out is that the Kings’ shooting percentage at 5-on-5 has dropped from 6.96 with Doughty and Anderson to 4.35 without. Los Angeles is a high-volume shooting team, but slightly better puck luck on their shots seems inevitable.

The Kings thrive when they are attacking up the walls on the forecheck and forcing their opponents to exit the zone through the middle of the ice. Los Angeles will want to exhaust the Kraken by forcing them to chase them around their own end.

If Seattle wants to keep this game close, it will need to manage the puck wisely. The Kings are difficult to play because they force teams to chip and chase by gapping up on their 1-3-1 neutral zone forecheck. Therefore, it will be incumbent on Seattle to dump the puck or power the puck into areas where Los Angeles can’t cleanly retrieve.  When the Kraken gain possession in the offensive zone, they will surely look to expose the Kings’ man-on-man defence by luring them to the point and then darting past them off their high rotations.

One component of this matchup that really shouldn’t be overlooked is goaltending. On the season, Kraken goaltender Philipp Grubauer is New York Rangers’ Igor Shesterkin’s exact opposite, the runaway leader in goaltending putridity, and backup Chris Driedger isn’t far behind. It’s been often repeated but should always be remembered: Goaltending is the simplest answer to why the Kraken had a miserable season.

It’s a different situation for Los Angeles, where goaltending has been a bright spot. Jonathan Quick has had an unexpectedly good season, and both he and Calvin Peterson have played well in the past month.

The Kings haven’t been a great home team, but the Kraken are dreadful on the road. Seattle’s current two-game win streak matches its longest of the season. This is an important game for the Kings, and I think they will win comfortably. I’ll take the 60-minute line here too!