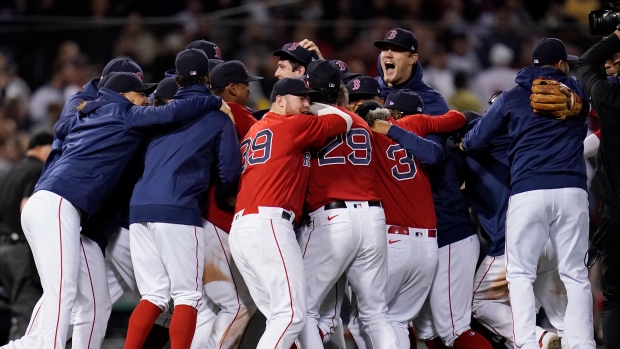 The Boston Red Sox are moving on.

The Red Sox (+120) advanced to the American League Division Series with a 6-2 win over the rival New York Yankees on Tuesday night.

Meanwhile, the team at the top of that World Series futures list will enter a one-game elimination tonight when the Los Angeles Dodgers host the St. Louis Cardinals in the NL wild-card game.

At +375, the Dodgers have by far the shortest odds to win the World Series among wild-card teams since Major League Baseball added the wild-card game in 2012.

The Red Sox delivered as a home underdog with a win over the Yankees at Fenway Park.

Nathan Eovaldi was outstanding for Boston, allowing just one run with eight strikeouts over 5 1/3 innings.

The Red Sox pitching staff combined to throw 11 strikeouts and no walks.

Meanwhile, Boston’s bats got to Gerrit Cole early with three runs in the first three innings, including a two-run home run by Xander Bogaerts in the first.

The @RedSox are riding into the ALDS! pic.twitter.com/sXfN3KmpOZ

Boston has now won eight of its past nine playoff games against the Yankees.

Meanwhile, a solo home run by Giancarlo Stanton with one out in the ninth pushed the over (eight). Stanton was +350 to hit a home run.

You wanted Boston?
You got Boston. pic.twitter.com/iBVhNddoSk

The Red Sox will move on to play the Tampa Bay Rays in the ALDS.

The Rays, which are the second choice to win the American League at +250, opened as a -160 favourite to win the series. Boston is +140 to advance to the ALCS.

Meanwhile, the Houston Astros are -130 to win their ALDS. The comeback on the Chicago White Sox is +110.

If they lose tonight, they are out. Los Angeles is a -230 home favourite.

At that number, the Dodgers are the second-largest favourite ever for an MLB wild-card game. The comeback on the Cardinals is +190.

After finishing with the second-best record in baseball this season, it would certainly be something if Los Angeles is knocked out in a one-game elimination spot.

While it’s a lopsided matchup on paper, St. Louis needs one win to advance, so it won’t surprise me if there is a good number of tickets on the underdog.

At +190, the Cardinals have essentially the same odds to win tonight that the Dodgers do to win the NL (+200).

Something has to give in Wednesday's NL Wild Card Game.

The Toronto Argonauts and Ottawa Redblacks will kick off Week 10 of the CFL season tonight on TSN.

Toronto opened as an 8.5-point favourite.

The Argonauts covered in a 30-27 win over the Montreal Alouettes in Week 8 before their bye.

Toronto is 3-0 straight up and against the spread at home this season.

Meanwhile, the Redblacks are coming off just their second win of the season after beating the Edmonton Elks 34-24 at home in Week 9.

Ottawa is 2-0 against the Elks this season with a pair of upset wins. However, the Redblacks are 0-5 straight up and against the spread against all other opponents.