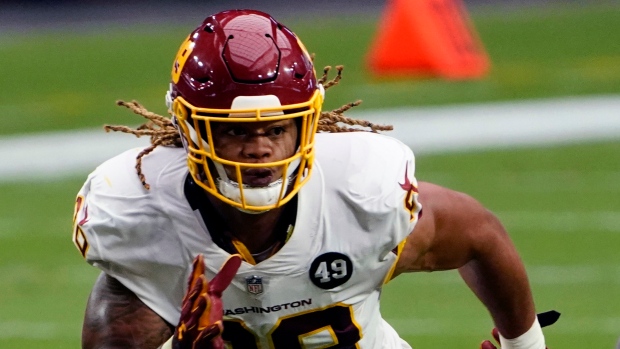 In this NFC East preview we’ll dive into Dak Prescott’s chances to lead the league in touchdowns, why the Washington Football Team could win this division, and we take a look at the under for New York and Philadelphia.

Only one quarterback passed for at least 400 yards in three games last season. That man was Dak Prescott. Yup, believe it or not, Prescott passed for 1,690 yards and nine touchdowns in the first four games of 2020 before breaking his ankle in Week 5. He enters the season at +500 to lead the league in passing yards, but there’s just something about that +1500 ticket that feels a lot better. Dallas’ defence ranked among the worst in the league and despite focusing on defence in the draft and bringing in Dan Quinn as defensive coordinator, I just don't see this Cowboys defence making a massive leap this season. Prescott, if he can stay healthy, could be poised to continue his historic pace that he set last season and be among the leaders in touchdowns passes this season. You’re definitely getting some good value at +1500.

The Washington Football Team won this division last season and I believe they could be on track to win it once again in 2021. In the NFL, two things are always important to winning: coaching and defence. The Football Team has a proven head coach in Ron Rivera, who after starting 1-5 last season helped coach Washington into the playoffs winning six of their last eight games. On defence the Football Team ranked fourth in the league in scoring by allowing just 20.6 points per game thanks to a unit led by four former first-round picks. With most of the core returning and some key additions in the draft and free agency, you can expect this defence to once again find themselves in the conversation for best in the league. Chase Young, fresh off 7.5 sacks in 15 games during his rookie season, has the fourth-shortest odds to lead the league in sacks at +1200. On offence, Washington has a number of weapons at wide receiver and running back, and have the added bonus of not needing to rely on Dwayne Haskins at quarterback. This Football Team could make some noise this year.

If you’re looking for a believer in Daniel Jones, then you have come to the wrong place. Questions have surrounded the now third-year quarterback since he entered the league and his play has made those questions valid. Since 2019 Jones is 8-18 as a starter with 35 touchdowns and 22 interceptions. When you include the 23 fumbles he has lost, he turns the ball over 1.2 times for every touchdown he has passed for in the NFL. Simply put, it's just not good enough. New York won a combined three games against the Cowboys and Football Team last season, something they won’t do again this season. Looking at their schedule they are projected to be underdogs in 11 of their 17 games. Kenny Golladay, who was a key off-season addition, is already battling injury while questions still remain about the Giants’ ability to rush the passer on defence. The more I look at this roster, the harder the path to eight wins is for this team.

Not a whole lot went right for the Eagles last year en route to their 4-11-1 season. With quarterback Carson Wentz and head coach Doug Peterson now out of town, expectations for the 2021 season aren't that high either. Despite the addition of wide receiver DeVonta Smith with the No. 10 overall pick at the draft, and a healthier offensive line expected for 2021, I expect this Eagles team to fall short of the number for a few reasons. According to preseason rankings, Philadelphia possesses the 11th-hardest schedule this year and are projected to be underdogs in 11 of their first 12 games. In addition, Hurts completed just 52.03 per cent of his passes last year and turned the ball over six times in four starts. Don’t get me wrong, I like Hurts. His ability to run the ball makes him a viable fantasy football quarterback, but I question if the Eagles have surrounded him with enough talent to get past his shortcomings this early in his career. It could be another long season for fans in Philadelphia, getting +125 odds at under 6.5 feels too good to pass up.