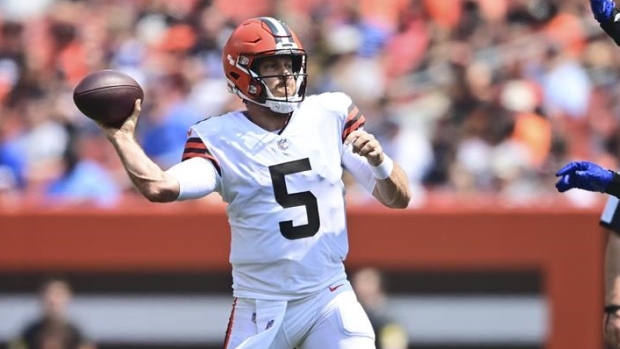 Last week we saw Nick Sirianni and the Philadelphia Eagles sneak out a backdoor cover when they converted a two-point conversion down eight points in the fourth quarter to cover the +6.5.

This week, Teddy Bridgewater and the Denver Broncos are slight underdogs against a banged-up Cleveland Browns team.

Denver enters this game in the midst of a three-game losing streak, after starting the season with a 3-0 record.

Meanwhile, the Browns limp into Thursday night without their starting quarterback and neither of their two featured running backs.

Cleveland has dropped two straight games entering Week 7 and have allowed 84 points over those two losses.

It’s been the tail of two halves for Teddy Bridgewater and the Denver Broncos to start the season.

After six weeks, the team has had a 3-0 stretch to open the season and enter this game 0-3 in their last three.

After allowing just 26 points in their first three games of the season, the defence has given up an average of 28 points per game since Week 4.

Meanwhile, the offence has struggled all season and enters this game ranked 22nd in the league with 126 points scored.

Bridgewater enters the game with an over / under of 229.5 passing yards, a number he has eclipsed in five of his six starts this season.

Sutton has caught 33 passes this season for 471 yards and two touchdowns, while Fant has hauled in 30 receptions for 273 yards and three scores.

Don’t expect to see these players on the field Thursday night.

Cleveland will be without three of their biggest stars on offence Thursday night due to injury.

Stepping in for Mayfield will be backup quarterback Case Keenum.

Keenum last started for the Washington Football Team in 2019, and led the Minnesota Vikings to the playoffs in 2017.

With the status of wide receivers Odell Beckham Jr. and Jarvis Landry up in the air, it’s possible the tight ends could have a big night in Cleveland.

Back in 2017, Kyle Rudolph caught 81 passes and tied for the lead on Minnesota with his eight touchdowns from Keenum.

If Keenum leans on his tight ends, Austin Hooper at +310 and David Njoku (+430) might be worth a sprinkle to find the end zone for the Browns.

Ultimately, if the Browns are going to win this game, which I believe they can, it will have to be largely due to the defence.

Myles Garrett enters this game as the favorutie at +350 to win Defensive Player of the Year.

The defensive end has gotten to the quarterback a lot this season, and leads the league with his eight sacks and nine tackles for loss.

Cleveland opened as a four-and-a-half point favourite, but due the injuries we have discussed that line has dropped a number of points.

The line isn’t the only number on the move as the 40.5 total is a full three points lower than what it opened at.

The Browns are 3-3 against the spread this season but are just 1-2 ATS at home.

Meanwhile, Denver is also 3-3 ATS to start the year but are 2-1 ATS on the road.

This feels like a perfect spot to fade the public, in my opinion.

I think Denver is going to be a very popular underdog, and after the public cleaned up in Week 6, I think we will see the sportsbooks start to level the score again Thursday night.

I’m taking the Browns to cover.