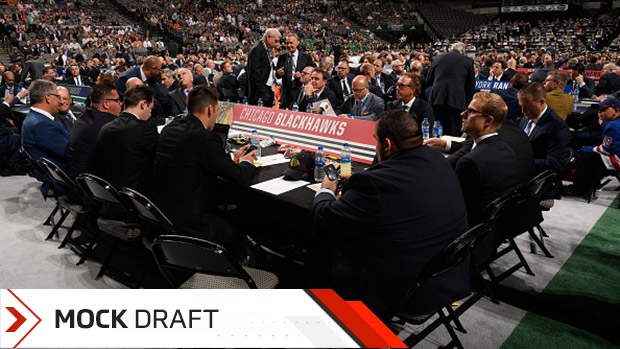 VANCOUVER - The intrigue begins at pick No. 3 for arguably the fifth straight NHL draft.

With projected pairs of uber-prospects occupying the top two spots each year since Connor McDavid and Jack Eichel in 2015, the first truly open-ended question has been: Who goes third overall?

Turcotte is not a new choice for third overall – but his competition is. Button thinks it comes down a decision between two centres: USA U-18’s Turcotte, a Jonathan Toews-like player, and Saskatoon’s Kirby Dach, a Ryan Getzlaf-like pivot.

“The temptation to select a player cut from the same cloth as Toews will prove too great,” Button says.

Button previously had defencemen prospect-rich Chicago selecting Turcotte over blueliner Bowen Byram. He also had Dach going fourth to Colorado and Byram to Los Angeles at No. 5, but today he says Byram won’t get past the Avs.

“Bowen is a complete, elite blueliner destined to be a No. 1 defenceman in the NHL,” Button says. “If the Avs take Byram, it will only increase speculation Tyson Barrie is going to get traded.”

The 6-foot-4 Dach then goes to Los Angeles even though the Kings picked four centres with their choices in each the first and second rounds in 2017 and 2018.

Next up is Matthew Boldy (USA U-18) to Buffalo at No. 7. Button jokes Boldy has two things going for him: he’s the best power forward in the draft and he doesn’t play in the CHL. The Sabres’ Jason Botterill has picked 12 players in two drafts since taking over as GM and famously not a single one has come from Canadian major junior hockey.

“The Oilers need forwards and Cozens is can’t-miss, although he may be better suited as a winger than centre in the NHL,” Button says.

That, of course, would work out well for the centre-centric Oilers.

Another Canadian centre, Winnipeg’s Peyton Krebs, goes to Anaheim at No. 9.

Button says host Vancouver goes back to the future for the 10th overall pick, anticipating the Canucks will have Daniel and Henrik on stage selecting AIK defenceman Philip Broberg – on the 20th anniversary of their own selections at second and third overall in 1999.

“It you put Broberg with Quinn Hughes (last year’s No. 7 overall pick),” Button says, “you would have two of the best young skating defencemen in the league.”

No. 15, Montreal: Mississauga defenceman Thomas Harley. The offensive blueliner would fill the Canadiens’ urgent need for a left defenceman. After Button had Montreal picking Harley earlier this week, Canadiens’ play-by-play announcer Dan Robertson pointed out Montreal already has a Suzuki and now it would have a Harley. The Canadiens traded for 2017 draft pick Nick Suzuki in the Max Pacioretty deal last September.

No. 19, Ottawa: Hamilton right winger Arthur Kaliyev: The 51-goal, 102-point scoring Kaliyev is an ideal fit for a team that has traded away more goals than any other team over the past season, making deals that dispatched Erik Karlsson, Matt Duchene, Ryan Dzingel and Mark Stone from the Nation’s Capital.

No. 20, Winnipeg: Barrie centre Ryan Suzuki: Button says the playmaker would eventually plug in perfectly behind Mark Scheifele in the No. 2 centre slot.

No. 26, Calgary: USA U-18 centre John Beecher: “There is a lot of helium in his balloon,” Button says of draft buzz surrounding the fast-rising Beecher, who is listed as the No. 41 consensus prospect in the final TSN pre-draft rankings. Beecher is one of the best skaters in the draft and would give Calgary game-disrupting speed.

Here are all 31 first-round picks in Button’s final Mock Draft: