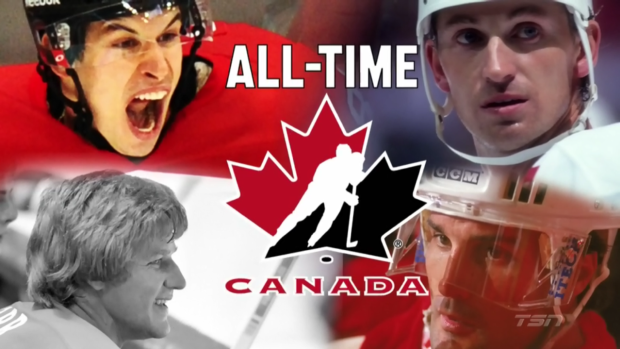 With TSN Hockey's All-Time 7 Project in the books, we present the All-Time Team Canada. First, the 23 players for the men's team, followed by the women's team on Tuesday.

“Henderson made a wild stab at it and fell. Here’s another shot. Right in front. Scores! Henderson has scored for Canada.”

Canada’s history in international hockey didn’t begin in 1972, it just seems that way.

There were important events and achievements over the first 50 years of global competition but it’s what has occurred over the past nearly 50 years that has captured the imagination of Canadian hockey fans.

Hockey Hall of Famer Harry (Moose) Watson scored an early era Olympic-record 36 goals in five games at the 1924 Games, but you won’t find him on TSN’s all-time team.

You will, however, find goalie Seth Martin who won a World Championship with the Trail (B.C.) Smoke Eaters in 1961 and was named best goalie in four of the five major international events in which he appeared.

Martin was considered a hockey god in the Soviet Union.

These days, goalie Carey Price is considered an international hockey god, accumulating a 10-0-0 record, 1.00 goals-against average and .965 save percentage in the 2014 Olympics and 2016 World Cup.

While there may have been six or seven authentic candidates to fill four or five positional slots on the NHL teams, there are double digit options at virtually every position for Team Canada.

It would be exponentially more challenging if we didn’t base membership on the all-time team to performances on senior men’s competition only and not the World Junior Championship. (Sorry, Jordan Eberle.) The greatest weight is given to best-on-best competitions, but World Championship accomplishments are a key factor as well.

The nature of international competition has necessitated three main changes to how we select an international team versus the manner in which we selected Canadian-based NHL teams:

One, whereas NHL team all-timers must have played at least 225 regular-season games with their NHL teams, there is no minimum for inclusion on Team Canada. Sample sizes are just too small for too many players. That is why you will find Bobby Orr (seven Canada Cup games), Paul Henderson (eight NHL Summit Series games, plus eight WHA Summit Series games) and John Tonelli (eight Canada Cup games) on the team. Their impacts were colossal, if not their game totals.

Two, for the NHL all-time teams, players were slotted at the positions they played for those teams. That led to players such as legendary Toronto centre Darryl Sittler being squeezed out. On Team Canada, however, coaches have a history of picking a surplus of centres and playing them on the wing to maximize skill level. Two of the most famous goals in international hockey history were scored by centres playing wing: Sittler was on left wing with Marcel Dionne when he scored the 1976 Canada Cup-winning goal and Mario Lemieux was on right wing with centres Wayne Gretzky and Dale Hawerchuk when he scored the 1987 Canada Cup-winning goal. And consider this: 11 forwards on Team Canada 2016 could be classified as centres.

Three, the Team Canada all-time lineup has been expanded to 23 (plus a foundational player) to conform with international roster sizes. For that, we say thank you. That gave us three more much-needed spaces: one each for a goalie, a defenceman and a forward.

So, there you have it, some of the thinking behind the all-time Team Canada.

We look forward to hearing what you’re thinking. 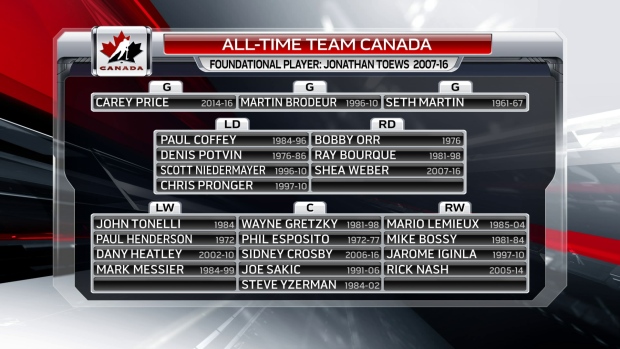 Goalie Martin Brodeur
Brodeur was undefeated in the 2002 Olympics and 2004 World Cup, helping restore Canada’s standing in the hockey world after a fourth-place finish in the 1998 Olympics.

Goalie Seth Martin
Named Best Goalie at three World Championships and one Olympics, Martin backstopped Trail Smoke Eaters to the 1961 global title – the last gold for Canada at the annual tournament until 1994.

LD Paul Coffey – RD Bobby Orr
Orr 1.0 and Orr 2.0 (aka Coffey) form the most exciting defensive tandem in hockey history. Orr was MVP of the only international tournament he ever played – the 1976 Canada Cup – and Coffey was a linchpin player on three Canada Cup teams.

LD Chris Pronger
Pronger is the only Canadian to play in four Olympic tournaments during the NHL era.

LW Paul Henderson – C Phil Esposito – RW Mike Bossy
Henderson’s game-winning goals in the final three games of the Summit Series salvaged national pride in Canada, while Esposito was that team’s heart and soul. Bossy did for his country what he did for every team he ever played for – score goals, 13 in 15 Canada Cup games

C Steve Yzerman
Yzerman made his mark in the World Championship – recording 38 points in 28 games - before contributing mightily to the 2002 Olympic gold.

Foundational Player - C Jonathan Toews
There may not have been a more consistently important forward over the championship hat-trick period – 2010 Olympics, 2014 Olympics and 2016 World Cup – than Toews whose style of play is truly part of the fabric of Canadian hockey.

Head Coach Mike Babcock
Babcock has a 17-1-0 record over the past three major international tournaments – 2010 Olympics, 2014 Olympics and 2016 World Cup - all of them won by Canada. Babcock also guided Team Canada to the 2004 World Championship, making him a titleholder in all three premier international events.

There is a long list of unfortunate last cuts. Rob Blake was named top defenceman at both the Olympics and World Championships. Paul Kariya was a standout in a pair of Olympic gold medal games. Eric Lindros burst on the men’s international scene as an 18-year-old in Canada Cup ’91. And Ryan Smyth has represented his country in a record 60 games at the World Championship, wearing the ‘C’ six times, earning the nickname Captain Canada.

Who is the greatest omission from Team Canada’s all-time team?