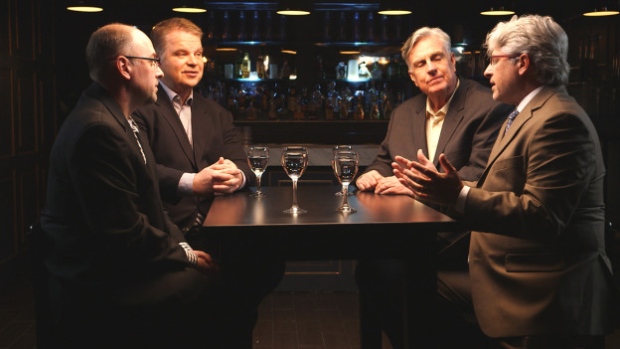 CFL Around The Table

TORONTO - TSN primes fans for kickoff of the 2016 CFL season as CFL AROUND THE TABLE, a forum for candid conversation and debate about hot-button issues around the CFL, returns with a new three-part series, delivering further in-depth discussion with the league’s biggest names.

EPISODE ONE: The General Managers

Host Rod Smith is joined by Toronto Argonauts General Manager Jim Barker, Montreal Alouettes Vice President, General Manager, and Head Coach Jim Popp, and Ottawa Redblacks General Manager Marcel Desjardins to discuss “eye in the sky” and other rule changes for the upcoming 2016 season, the relationship between players and GMs, and the difficult decisions made in the off-season.

Smith is joined by Roughriders General Manager and Head Coach Chris Jones, Winnipeg Blue Bombers Head Coach Mike O’Shea, and Calgary Stampeders rookie Head Coach Dave Dickinson. Highlights of the conversation include their personal paths to coaching, regrets of games past, and what they do to get away from the stress of the game.

Smith sits down with three CFL stars: Edmonton Eskimos quarterback Mike Reilly, Blue Bombers running back Andrew Harris, and Hamilton Tiger-Cats’ quarterback Zach Collaros. They discuss the physical and mental toll of recovering from a major injury, interacting with fans on social media, and trash talking on the field.

CFL AROUND THE TABLE is part of CFL ON TSN’s comprehensive season preview coverage leading up to the 2016 season opener featuring the Hamilton Tiger-Cats visiting the Toronto Argonauts in the Argos’ first game at their new home of BMO Field, airing Thursday, June 23 at 7 p.m. ET on TSN.