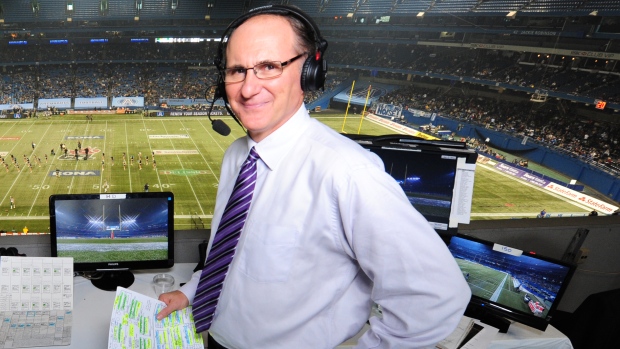 TSN play-by-play announcer Chris Cuthbert will be honoured by the Football Reporters of Canada as one of this year's inductees into the Canadian Football Hall of Fame's Media Wing.

Cuthbert will be formally inducted at the Football Reporters of Canada's annual gathering on November 30th, the morning of Grey Cup Sunday. Later that day, Cuthbert will call TSN's live coverage of the 102nd GREY CUP from BC Place in Vancouver – marking his 16th appearance in the booth for a Grey Cup broadcast.

"As one of the best broadcasters in the business, Chris is quite simply a master of his craft," said Stewart Johnston, President of TSN. "His impressive list of accomplishments is a reflection of the intense preparation and pure passion that he brings to every broadcast. He has done so much to elevate the game from a broadcast perspective. We join the rest of the football community in congratulating Chris on this very well-deserved honour."

A sports broadcasting veteran of more than 30 years, Cuthbert joined TSN in June 2005 as a play-by-play announcer for the network's CFL and hockey coverage. In 2006, Cuthbert and CFL ON TSN analyst Glen Suitor won a Gemini Award for Best Sports Play-By-Play or Analyst for their work on TSN's CFL broadcasts. Cuthbert also won a Gemini Award in 1998 as Best Sports Broadcaster, and in 2004 was recognized by Sports Media Canada as Sportscaster of the Year.

Throughout his celebrated career, Cuthbert has been the voice of some of the biggest moments in sports, calling the action for numerous Grey Cups, Stanley Cup Playoffs, and Olympic Games, including the Vancouver 2010 Olympic Winter Games, where he delivered the call of Sidney Crosby's iconic overtime winner in the gold medal game, which has since become known simply as "the golden goal." Cuthbert won a Gemini Award for Best Sports Play-By-Play Announcer for his call of the game, which remains the most-watched television broadcast in Canadian history with 16.7 million viewers.