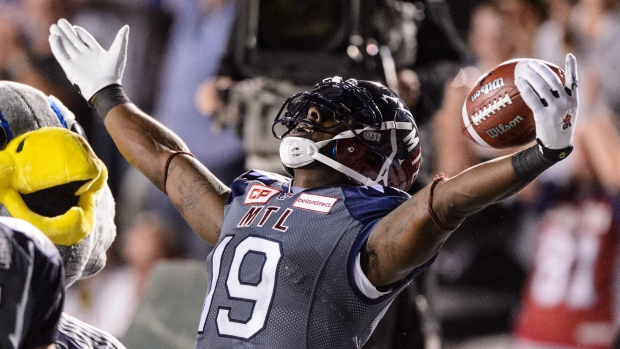 The CFL Players Poll results were released today, with the league-wide survey answering questions such as who is the league’s toughest player? It’s hardest hitter? And of course it’s best Tweeter?

TSN's Matthew Scianitti caught up with the trash talker and experienced some of the wit that helped him top the category when he was asked which four categories he thought he was a finalist in.

Trash talking, I’m definitely going to be in there. Hardest Hitter, I have to be in there. You know, with my picks, you have to give me some hands. I have hands! You have to put me Top 10 at least (Best Hands). I know there are a lot of Adarius Bowman’s and Fred Stamps and SJ Green but I’m coming for you guys, Lawrence said, laughing.

Lawrence also shared some of his secrets that got him voted the Biggest Trash Talker in the league.

"Usually I go after the real sentimental guys. Guys that you know you can get under their skin; guys that are really going to get upset."

"Henry Burris. You can get under his skin pretty easy."

Lawrence was also voted the league's fourth hardest hitter. He had some fun with the player he just beat on the list.

"He’s the same size as my defensive tackles and he can run like a linebacker so it’s like big ball, little ball," Lawrence laughed.

The seven newcomers voted atop a category this year include Brad Sinopoli, taking over for Kevin Glenn as the Most Underrated; Adam Bighill, beating out teammate Solomon Elimimian as the Hardest Hitter; Henry Burris as the new Most Accurate Passer over Ricky Ray; Dominic Picard, beating Shea Emry in the Nastiest Player category; Jerome Messam replacing Jon Cornish as the Toughest to Bring Down; Derel Walker the new First Year Player Destined for Stardom; and last but not least, Ricky Foley subbing in for Chad ‘Ochocinco’ Johnson as the Best Tweeter.