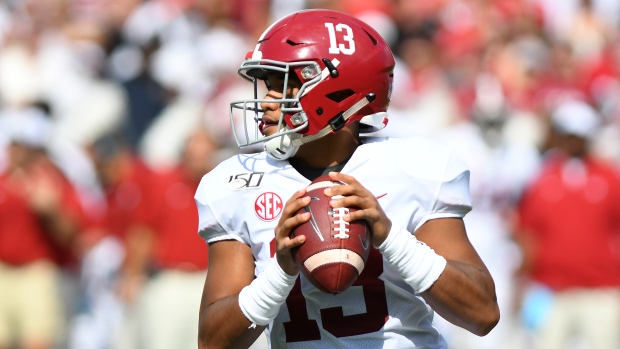 COLUMBIA, S.C. -- Tua Tagovailoa threw for a career-high 444 yards and tied his personal best with five touchdowns to help No. 2 Alabama open Southeastern Conference play with a 47-23 victory over South Carolina on Saturday.

Coach Nick Saban improved to 12-1 at Alabama in SEC openers and wiped away some bad memories of his last visit to Williams-Brice Stadium nine years ago.

Tagovailoa and his receivers quickly got the Crimson Tide (3-0, 1-0) rolling with first-quarter TD passes of 24 yards to Najee Harris and 81 yards to Henry Ruggs III. Whenever the Gamecocks (1-2, 0-1) drew within range, Tagovailoa came right back to restore Alabama's edge.

Harris added a 42-yard catch-and-run score where he broke two tackles and leaped over defensive back R.J. Roderick on the way to the end zone. DeVonta Smith caught Tagovailoa's last TD pass, also for 42 yards.

Saban reminded his players, about all who were in middle or elementary school in 2010, of the Tides' previous game here when the top-ranked Tide were soundly beaten 35-21.

And the Gamecocks tried anything they could to pull off another miracle, but little worked -- especially with Tagovailoa in complete control.

Parker White's fake field goal run to the end zone was called back because of holding. Alabama snuffed out a fake punt to stop the Gamecocks well short of a first down. And when South Carolina drove to Alabama's 1 on the final play of the half, freshman Ryan Hilinski's pass to the back of the end zone was off target.

Tagovailoa's passing yards were the third most in school history. He bettered his previous mark of 387 yards against Texas A&M and tied his personal best for touchdowns set against Auburn, both of those coming in 2018.

Smith and Ruggs both surpassed 100 yards receiving. Smith had 136 yards on eight catches, including two TDs. Ruggs had six catches for 122 yards.

Alabama: The Crimson Tide played a game sure to please Saban: Good enough to win by double-digits but with enough mistakes on defense for him to drill into players before next week. Alabama allowed a 300-yard passer and a 100-yard rusher, both benchmarks Saban will likely hone in going forward.

South Carolina: The Gamecocks showed some pluck in the face of the defending national champions. Freshman quarterback Ryan Hilinski threw for 324 yards and two touchdowns in his second career game with expected starter in injured Jake Bentley lost for the season.

Alabama's performance wasn't perfect, but it should certainly keep the Tide at No. 2 without major upheaval in the rankings.

Alabama returns home to another daytime kickoff when it plays Southern Miss on Saturday.