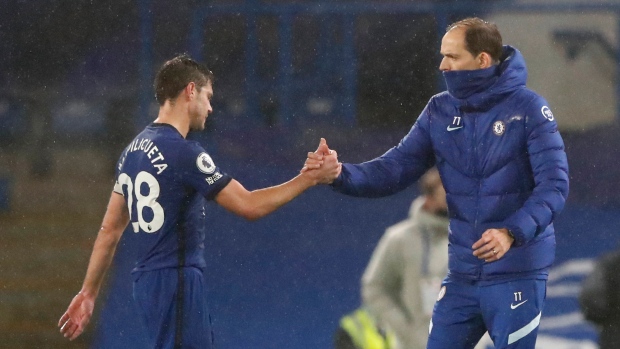 LONDON — Thomas Tuchel’s first game in charge of Chelsea ended in a 0-0 draw at home to Wolverhampton in the Premier League on Wednesday.

The German coach was hired on Tuesday as the replacement for the fired Frank Lampard, giving him just one training session to get his methods over to the players.

Tuchel shook up the team he inherited from Lampard by changing formation — to a 3-4-2-1 — and his desire for a more possession-based approach was evident from the start, but Wolves played defensively and proved a stubborn first opponent at Stamford Bridge.

The point moved Chelsea up to eighth but the result highlighted the task facing Tuchel as he seeks to get the team back into the top four and qualify for next season’s Champions League, a minimum requirement for the club owned by Russian billionaire Roman Abramovich.

Timo Werner stayed on the bench, where he was in the final days of Lampard’s tenure, and was joined there by midfielder Mason Mount — virtually an ever-present this season — and American winger Christian Pulisic. While Mount and Pulisic came on, Werner was an unused substitute.

Chelsea’s players monopolized possession — it was 86% in their favour in the opening 15 minutes and 79% by the final whistle — but struggled to break through or get behind a packed Wolves defence.

Indeed, the visitors came closest to scoring a winner when Pedro Neto bundled his way into the area, only for his scooped shot to soar over Chelsea goalkeeper Edouard Mendy and hit the top of the crossbar.

Chelsea peppered Wolves’ goal in the final 10 minutes, with Mateo Kovacic curling a long-range shot against the outside of the post and Hudson-Odoi bringing a flying save out of goalkeeper Rui Patricio.

In the last action of the game, Havertz’s goalbound header was deflected wide of the post and the German had his head in his hands as the final whistle blew.

Chelsea has won just two of its last nine games.