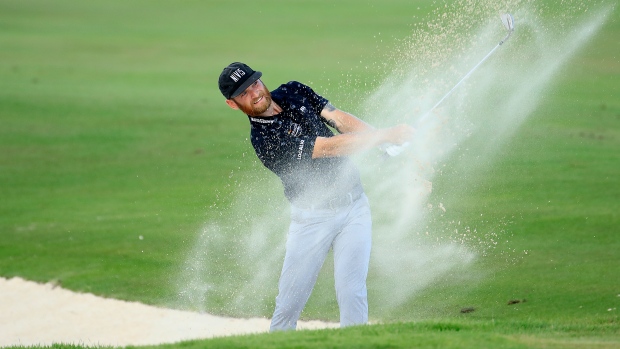 PUNTA CANA, Dominican Republic — Tyler McCumber was the only player to reach 8-under par Thursday in the Caribbean breeze until he dropped a shot on his 17th hole and fell into a four-way for the lead in the Corales Puntacana Resort and Club Championship.

Sepp Straka was the only one at 7-under 65 who kept a clean card. He was joined by Hudson Swafford, who made two tough par saves late in his round, and Scott Harrington, who made bogey on the second-easiest hole on the Corales course at Puntacana Resort and Club.

They were one shot clear of Xinjun Zhang and Joseph Bramlett, while former Southern California star Justin Suh got his season off to a happy start and was among those at 67.

Straka's round was highlighted by a 5-wood to 5 feet for eagle on the par-5 fourth hole early in his round. He also was the only player at 65 who played in the morning before a stiff ocean breeze kicked up late in the afternoon.

“This course is not really one where you can push it,” Straka said. “You can shoot a low round out here, but it's got to be a consistent low round.”

Rob Oppenheim would appreciate that. He was 4 under through six holes, only to make a pair of bogeys and then take a double-bogey 7 on the par-5 12th hole. He wound up with a 72.

David Hearn of Brantford, Ont., was the low Canadian after firing a 5-under 67 to finish the round tied for seventh.

The tournament typically is held in the March opposite a World Golf Championship. It was postponed to the week of the Ryder Cup because of the COVID-19 pandemic. And with the Ryder Cup since postponed until 2021, Punta Cana is now a full FedEx Cup event. The winner receives an invitation to the Masters in April.

McCumber, the son of 10-time PGA Tour winner Mark McCumber, also made eagle on No. 4 and his birdie on the par-5 seventh took him to 8 under. But his approach on the next hole went long, along the rocks. He tried to play from there and moved it sideways, and he kept the damage to a bogey by making an 8-foot bogey putt.

Harrington never feels more relaxed than on resort courses along the ocean, and such was the case as he motored his way into a share of the lead. But toward the end of his round, he hit a tee shot so wild the ball was deemed lost and he had to return to the tee to play his third shot. He managed to make bogey.

He rolled in a birdie putt on the next hole, and then hit his tee shot to 8 feet on the par-3 ninth, only to burn the edge of the cup on his birdie attempt to finish the round.

Swafford had four birdies in five holes to start the back nine, but then it was a matter of hanging on. From a fluffy lie left of the 16th green, his pitched stopped quickly and he made a 12-foot par for par. Then, he found a front bunker on the par-3 17th along the Caribbean, blasted out to 7 feet and made that. He finished with a birdie to join a share of the lead.

Suh was featured last summer as part of a strong college class turning pro, holding a press conference at the Travelers Championship with Collin Morikawa, Matthew Wolff and Viktor Hovland.

Suh missed nine out of 11 cuts on sponsor exemptions in PGA Tour events since turning pro, though he played well on the PGA Tour Latinoamerica and spent August getting solid results in a makeshift tour for Latin America and Canadian tour players,

“They really got their game together just right off the bat turning pro,” Suh said. “Unfortunately, on the first few starts that I had I was facing a wrist injury and just kind of had to battle back. Kind of changed my swing a little bit just so I wouldn’t have to face that anymore.”

He's healthy now. Suh said he played with Morikawa a few weeks ago and beat him in a friendly match.

“So the game's there," he said. “It's just a matter of putting it together at a tournament.”