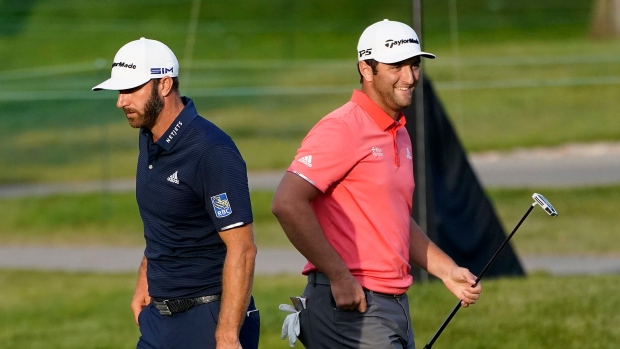 The third major of the 2021 PGA season is upon us as the world's best converge on famed Torrey Pines Golf Course in San Diego.

This track hosts the Farmers Insurance Open every year, an event won by Patrick Reed this season.

The last time it hosted the U.S. Open, Tiger Woods won in an epic playoff over Rocco Mediate in 2008 while he battled through a broken leg.

Jon Rahm, who won at Torrey Pines in 2017 for his first PGA Tour victory, is installed as the betting favourite to win his first career major.

Two weeks ago, Rahm was in cruise control at the Memorial, leading by six strokes through 54 holes and a victory seemed all but assured.

Upon completion of his round Saturday, he was informed that he had tested positive for COVID-19, forcing him to withdraw from the championship.

He heads to the West Coast healthy and ready to rock following a negative COVID-19 test, where he'll aim to break through for his first major title.

Phil Mickelson is fresh off his spellbinding triumph at the PGA Championship last month to become the oldest major champion ever, at age 50.

The U.S. Open has long eluded him in his quest to become just the sixth man to complete the career grand slam.

Lefty has finished runner-up a soul crushing six times in his career.

Bryson DeChambeau, who crushed drives en route to a six-shot romp at Winged Foot in September, returns as defending champion.

There are four Canadians teeing it up, with Corey Conners by far considered the best chance by oddsmakers at +6600 to lift his first major hardware.

In the two previous majors in 2021, he was T-8th at the Masters, then led the PGA Championship after Day 1 before settling for a T-17th result.

Adam Hadwin, who is in search of his first career top-10 in a major in his 17th attempt, has Canada's second-best chances at +25000.

Mackenzie Hughes and Taylor Pendrith, who was the low Canadian at the 2020 U.S. Open by virtue of his T-23rd finish, both face steep +40000 odds to win their first major title.

Last weekend, Brooks Koepka missed the cut at the Palmetto Championship, which for most players might be cause for concern heading into a major.

Not the case for Brooks, who has admitted in the past he takes minor tournaments lighter in his preparation for the grandest of stages.

When the lights come on in prime time at big events, Koepka is contending to win more often than not.

Last month's PGA Championship was a prime example, as he finished in a tie for second following two missed cuts.

The four-time major champ has two U.S. Open trophies in his cabinet, having taken the 2017 and 2018 editions, and very nearly did it again in his bid to three-peat in 2019, where he was second to Gary Woodland.

He was not able to compete in 2020 due to injury, meaning his last three U.S. Open events have resulted in two wins and a runner-up finish.

In his last six overall U.S. Open's, Koepka has been no worse than T-18th.

He's been a titan in his last 11 majors, racking up eight top-seven finishes.

He's earned a title this year at the Waste Management Phoenix Open, and was tied for second at a World Golf Championships event (before missing time due to injury).

At +1800 odds to win outright, you're getting him at better value than the duo of Rahm and Dustin Johnson, which is palpable given how amazing he performs at major championships.

Past Five Winners of the U.S. Open

It defies logic that Tony Finau has won just one PGA Tour event, way back at the 2016 Puerto Rico Open.

What makes it even more baffling is that he's already amassed 10 career-top 10's in major championships.

On the season, he's sixth in strokes gained tee-to-green and seventh around the green.

This course arguably provides Finau with his best shot to finally capture that elusive trophy, as he's done everything but win the last five years at the Farmers Insurance Open.

In the last 12 rounds at this venue, he's fourth in total strokes gained, fifth in SG: tee-to-green and third in short game.

His +2500 odds are still decent, considering his success at Torrey Pines and how much he contends in majors.

However, you must go into it with eyes wide open knowing that he might suffer yet another devastating defeat.

In that sense, perhaps a +500 wager for him to finish in the top five would be easier to stomach.

Make no mistake about it, wagering on grizzled 44-year-old veteran Ryan Palmer to win his first career major championship is fool’s gold, despite the tantalizing +12500 odds.

However, his fantastic track record around this course opens up plenty of intriguing possibilities for top 5/10/20 wagers on the four-time PGA Tour champion.

What makes it super unlikely he'll go the distance and get over the finish line is that he hasn't won an individual tournament since 2010 (he won the Zurich Classic, a team event in 2019).

The last four years at Torrey Pines he's been fantastic, with two runner-ups (this season and he lost a playoff in 2018).

In the last 12 rounds at this track, Palmer is fourth in ball striking and 10th in total strokes gained.