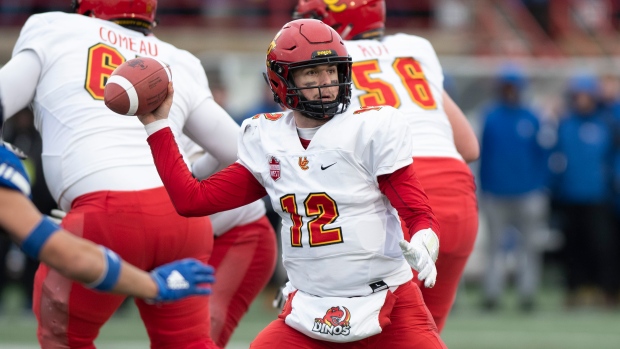 Canadian university sport has ground to a virtual halt because of the COVID-19 pandemic that also wiped out this year's Vanier Cup.

U Sports cancelled six fall championships, including the Nov. 28 annual football title game in a city that had yet to be announced.

The women's field hockey and rugby, men's and women's cross-country and soccer championships all scheduled for later this year were also cancelled.

The Vanier semifinal Mitchell and Uteck Bowls were called off.

Joseph, 23, has one year of eligibility remaining, but needs U Sports to alter its football age-out rule for him to play in 2020-21.

"As of the rule, personally I would age out," Joseph told The Canadian Press. "That was pretty devastating to hear.

The Atlantic and Ontario conferences announced Monday all varsity sport is shut down to the end of 2020.

Canada West, which encompasses the four western provinces, will not operate any team sports for the rest of the calendar year, but has yet to make a decision on golf, cross-country and swimming.

Decisions also await on whether winter sports can resume in 2021.

"Frankly, if there's no vaccine and the physical-distancing requirements have not changed across our four provinces, it's going to be hard to envision us playing a January to March season," Canada West president Clint Hamilton said.

The RSEQ has yet to declare its plans for Quebec.

U Sports said in its statement athletes whose championships are cancelled in the 2020-21 season will not lose a year of eligibility.

Joseph, however, represents a cohort of football players caught up in rule designed to limit the age of players in Canadian university football to under 25. Players have seven years after graduating from high school to complete their five-year eligibility.

"They encourage players to play a couple years of junior before U Sports," Joseph said. "I think with the amount of players in that situation, it would be a shame not to bump that age date.

"I'm really hopeful and will be advocating for that."

Schools can continue offering athletic financial awards — known as AFAs — which are generally tuition and fees.

"I'm hopeful we're still able to offer the robust financial aid to our student-athletes again," Dinos athletic director Jason Kerswill said. "If our athletes are training and doing what they need to do to make sure they're ready to compete when possible, we want to support them as best we can."

Canada West announced in May a reduced football schedule from eight regular-season games to five, as well as schedule changes to other sports.

Hamilton said Monday's announcement was more about preventing the spread of a virus that has killed almost 8,000 Canadians than money.

"Of course, in Canada West, we did do a scope of work understanding institutions were facing financial challenges," he said. "Finances are always part of the equation, but . . . this decision was being made in the health interests of our student-athletes, coaches, fans and the public."

While much of the 2019-20 season was complete before COVID-19 shut sport down mid-March, the national men's and women's hockey and volleyball championship were cancelled.