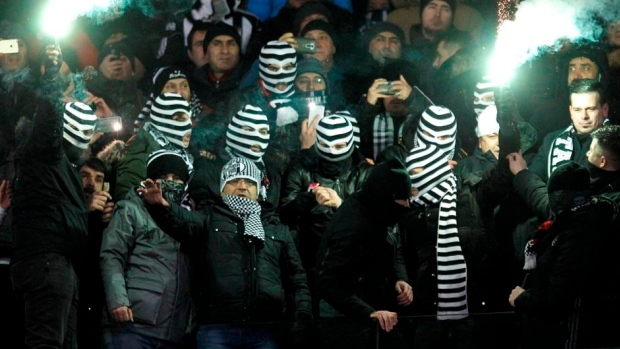 KIEV, Ukraine — Ten people were injured in fighting between supporters of Dynamo Kyiv and Turkish team Besiktas around a Champions League game between the teams, Ukrainian police said on Wednesday.

A police statement said of the 10, all of whom were described as "foreigners," eight were injured on Tuesday in beatings and two were stabbed in clashes near the stadium, which will host the 2018 Champions League final. There were no further details about the seriousness of the injuries.

Police said none of the 10 agreed to give an official statement.

Video footage online shows large crowds fighting in the street, some using sticks and fireworks as weapons. Some Besiktas fans also clashed with police inside the stadium, but authorities said another, larger confrontation nearby was avoided.

"Coordinated activity (by police and National Guard units) made it possible to prevent a mass fight between football fans of both teams, with around 200 people on each side, near the sports arena," police said.

There has long been bad blood between fan groups from the two countries, and there were clashes when Turkish club Fenerbahce visited Ukraine in September to play Zorya Luhansk.

Turkish newspaper Sabah, which is close to the government, said "tens of people" were attacked by "masked individuals in military uniforms" targeting Besiktas supporters. Some injured Turkish fans flew home on the first available fight, the newspaper reported.

Dynamo Kyiv fans have repeatedly been involved in violence and racist incidents in recent years, including co-ordinated attacks by far-right fans on black supporters during a Champions League game against Chelsea last year.

Ayse Wieting in Istanbul contributed to this report.