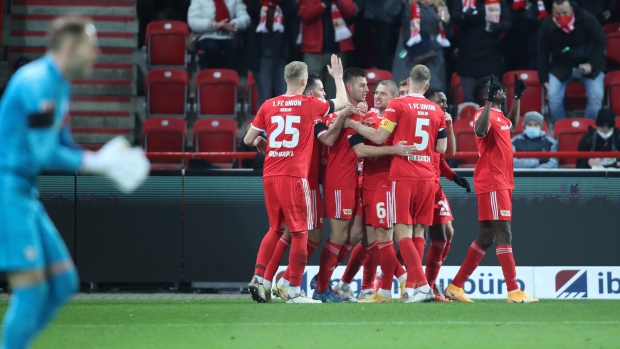 BERLIN (AP) — Roared on by its biggest crowd for the foreseeable future, Union Berlin defeated Leipzig 2-1 to climb to fourth in the Bundesliga and deepen the visitor's crisis on Friday.

Goals from Taiwo Awoniyi and Timo Baumgartl lifted Union into a Champions League qualification place ahead of the rest of the 14th round and left Leipzig scrambling for answers after its third successive domestic defeat.

Leipzig was without coach Jesse Marsch and his assistant Achim Beierlorzer due to coronavirus infections. Players Willi Orban and Hugo Novoa were also in isolation amid an outbreak at the club, while striker Yussuf Poulsen was out with a calf injury after recovering from his COVID-19 infection.

Assistant Marco Kurth conveyed Marsch’s instructions from afar, but the visitors’ star player was goalkeeper Péter Gulácsi amid snowfall in the eastern Berlin borough of Köpenick.

Union was allowed half capacity in its 22,000-capacity stadium, but new restrictions are taking hold with effect from Wednesday limiting numbers at 5,000 in a bid to control rising infection rates.

Awoniyi opened the scoring in the sixth minute, finishing off from close range for his ninth goal of the season after Baumgartl headed on a Julian Ryerson cross.

Christopher Nkunku equalized a few minutes later when Union goalkeeper Andreas Luthe misjudged the French player’s harmless looking shot from distance. The ball bounced in front of Luthe before passing over through his hands.

It proved to be the winner with the home team missing further chances.