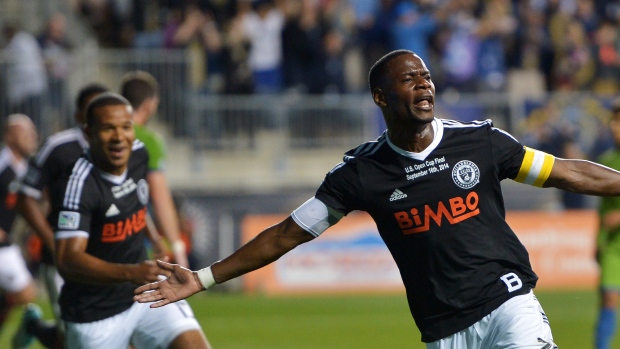 CHESTER, Pa. - The weather was miserable, but the Montreal Impact able to earn a point on Saturday night.

Ignacio Piatti and Jack McInerney scored their fourth goals of the season for the Impact in a 2-2 draw with the Philadelphia Union in a rainstorm.

Maurice Edu punched home a rebound from in front of the Montreal goal in the 76th minute to help the Union tie the game.

"I think we played a really good game under difficult conditions," said Piatti. "We played well as a group and earned an important point."

Eric Ayuk Mbu gave Philadelphia (5-10-4) a 1-0 lead in the eighth minute after one-timing a shot from the top of the penalty box.

The Impact (5-6-3) tied it when Piatti right-footed a shot from 20 yards out into the bottom right corner in the 28th minute.

McInerney, a former Union forward, put the short-handed Impact ahead just minutes after Patrice Bernier was sent off after getting a second yellow card. McInerney settled a pass from Andres Romero at the top of the box and fired a shot into the bottom right corner.

"We played well enough to win, but the positive is that we got a point on the road," said Montreal coach Frank Klopas. "We were dominant in position and created good chances."