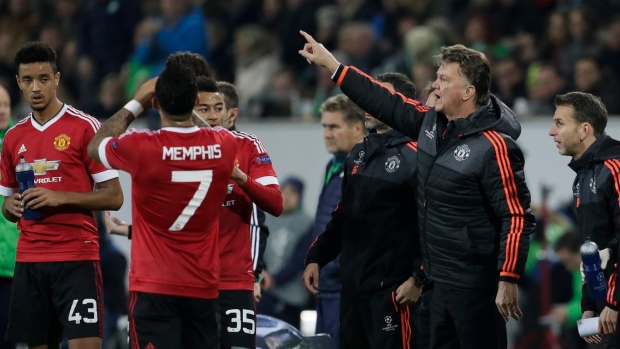 NYON, Switzerland - Dumped out of the Champions League, Manchester United's next European match will be a trip to western Denmark.

United was paired with Danish champion Midtjylland on Monday in the round of 32 of the Europa League.

Midtjylland, noted for its progressive management, was formed in 1999, midway through the English club's celebrated treble-winning season when it won the second of its three European titles.

Valencia, the 2004 UEFA Cup champion, was the first team picked and was paired with Rapid Vienna.

Liverpool manager Juergen Klopp also avoided a high-profile reunion, though he will head back to Germany. The English club was drawn to face Augsburg, with the first leg on Feb. 18 and the second leg a week later.

Like United and Porto, two-time defending Europa League champion Sevilla dropped into the second-tier competition after placing third in a Champions League group.

Sevilla, which was the first team to take up the Champions League place now awarded to the Europa League champions, will host Molde in the first leg.

In other pairings, it was: Fiorentina vs. Tottenham; Shakhtar Donetsk vs. Schalke; Villarreal vs. Napoli; Saint-Etienne vs. FC Basel; and Fenerbahce vs. Lokomotiv Moscow.

The Fenerbahce-Lokomotiv match will be the first competitive meeting between Turkish and Russian clubs amid political tension between the countries.