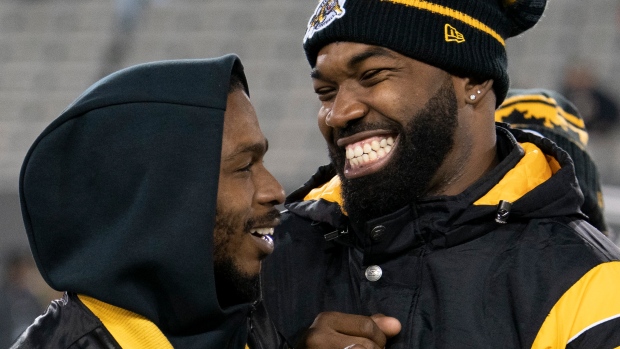 This is how it happened: It’s the end of June, and Simoni Lawrence needs a ride after Hamilton Tiger-Cats’ practice. Teammate Brandon Banks offers to drop him off on his way home.

Banks, Hamilton’s No. 1 receiver and kick returner, and Lawrence, Hamilton’s defensive leader and linebacker, have hung out plenty during their seven seasons together in Hamilton. But the two of them don’t often hang out alone, one-on-one, just ‘Speedy B’ and ‘Simmy Hov.’

Now Hamilton’s two top players are driving in Banks’ Audi, 20 minutes west on the Queen Elizabeth Way toward Grimsby, Ont., where Banks lives. Banks is talking quietly on his phone; Lawrence is just looking out the window. No music. It feels a little awkward. Banks and Lawrence are just so different.

Banks is the CFL’s great living lightning bolt. Put the ball in his hands hand and flash, bang, he’s gone. But for a receiver whose dynamism easily brings football fans to their feet, Banks is very shy. The 31-year-old would love nothing more than to score touchdowns every time he touches the football and then fly away immediately after every game. He’d sail to the middle of the Gulf of Mexico and not be bothered to do anything or speak to anyone until he can play another game.

Lawrence is what happens when you strap football pads to a firecracker. He’s loud, flashy, explosive, and dangerous. And then there’s that smile: toothy and bright enough to back up stadium floodlights. Coaches, teammates and fans all flock to Lawrence because he always has something to say, and because he’s so polarizing.

Right now, as he and Banks drive towards Grimsby, Lawrence is thinking about his league appeal for his hit on quarterback Zach Collaros on the third play of the season. On social media, some refer to Lawrence as “dirty” and “clown” and worse. Lawrence will be suspended for two games come mid-July, but right now he’s more concerned with how to start a simple conversation with his teammate.

Then Banks hangs up the phone. Silence.

“Bro, I have to tell you something” Banks says eventually.

Lawrence digs deeper into his seat.

Banks is referring to Hamilton’s 2019 season and this team’s chance to be great from June through to mid-November. Lawrence’s unmistakeable smile bubbles to the surface and he straightens up. It’s the kind of thing Lawrence was hoping Banks would say.

Of all the glories to come in the 2019 season – Hamilton’s record-breaking 15-3 regular season, the treasure chest of league awards and all-star nominations, and securing home-field advantage for Sunday’s East Final – it was a simple drive from Hamilton to Grimsby that helped the Ticats’ two greatest performers form a bond that galvanized their career seasons.

“We talked about not just how the Ticats, but how the [CFL] has grown,” Banks will say months later.

Over the last seven seasons, Hamilton has been the CFL’s home of heartbreak. Each year had its own soul-crushing moments: Getting overwhelmed by Rider Nation in the 101st Grey Cup; Banks’ miraculous, last-second return touchdown in the 102nd Grey Cup that was snuffed out by a controversial penalty; Henry Burris and Greg Ellingson’s pitch-and-catch to beat their former team in the 2015 East Final; Eight consecutive losses to open the 2017 season; Banks shattering his shoulder amid an unstoppable career year in 2018.

New Hamilton head coach Orlondo Steinauer wanted his team to feel differently about their culture and each other this season. There weren’t buzzwords and slogans thrown around flippantly during training camp, just honest, meaningful conversation on the field and in the locker room.

For Steinauer, having two key players take a summertime drive together along Lake Ontario and bond over a shared responsibility to not let each other take a potentially great season for granted would be the first of many moments to define a record-breaking 2019.

“I think when you build a culture there is more that goes into it than just spending time [together],” says Steinauer. “There’s a trust element, and trust isn’t built overnight. It’s built over time and in your body language, your demeanour, how you carry yourself, how you deal with certain situations that arise. As far as Simoni and Speedy, their bond has been building since they’ve been here together. There’s a long history. They understand what it takes and it means to be a Tiger-Cat.”

This season, Banks and Lawrence’s bond is so much deeper than football, and more gratifying than simply chasing that elusive Grey Cup ring. It’s the willingness of two stars, with different personalities and who never play together on the field, to truly open up and rely on each other.

It’s Lawrence, unmarried and without children, who calmly tells Banks to listen to his nine-year-old son, Brandon Banks Jr., and appreciate the pressure of a young boy trying to live up to his accomplished father.

It’s Banks, suspended in 2016 for violating the CFL’s drug policy, who tells Lawrence to use his own suspension as “fire,” and use the two weeks away from the field to “clear his mind and come back and be Simoni.” And it’s Lawrence telling Banks to stay away from social media confrontations because “it’s $250 [league fine], and we’re going to make that in the playoffs.”

It’s Banks who “kicked [Lawrence’s] ass” at 10-pin bowling, laughing and teasing Lawrence in his quiet, smooth North Carolina accent. But it’s Lawrence who will call the next strike, puts money down, and collects every single time.

Over countless meals and quiet moments watching TV on each other’s couch, Lawrence will learn about a young Banks who came from Garner, N.C., and how that all felt like pretty much nothing, and Banks was told 5-foot-7 was too small to play football.

Banks, always willing to offer a ride, will learn personal things about Simoni he just won’t share with others, because that’s between them and the rest of the world doesn’t need to know.

“I’m trying to be the brother I am, and lead him in a positive direction, and [tell Lawrence] to be him,” says Banks.

In the photo, Lawrence and Banks are facing each other, looking at each other, smiling. There’s no caption, only teammates. Only brothers.

“We’re here for each other,” says Banks. “We know what is at stake. We don’t want to let anybody down, especially this organization and this city. This city deserves a Grey Cup. That’s what we’ve really been talking to each other about – bringing a Grey Cup to this city. It’s been too long.”

“The best times we’ve had is when we do stuff together,” says Lawrence.

But before all of 2019’s many “best times,” Banks offers Lawrence a ride and they share a quiet moment together. On the road, headed in the same direction, they both realize something great is about to happen.