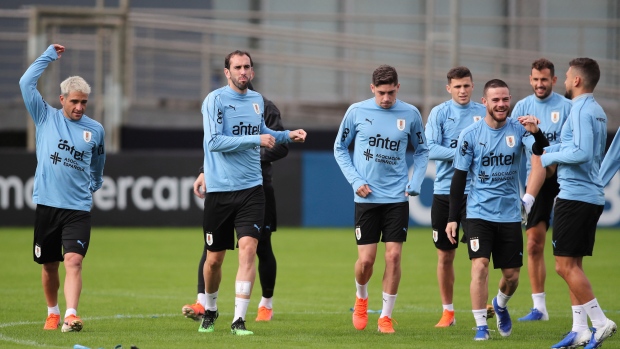 The Uruguayans were wary of it at first, but after their convincing 4-0 opening win over Ecuador, coupled with slow starts by Brazil and Argentina, it became hard to ignore the "Celeste" as a top contender for the South American title.

"We are not thinking about, but if they are talking about us, it's for a reason," goalkeeper Fernando Muslera said. "It's a nice thing to be treated well and see people believing that Uruguay can win the tournament."

Uruguay, which takes on guest Japan in its second match on Thursday in Porto Alegre, arrived in Brazil seeking a record-extending 16th Copa title. It was touted as one of the favourites along with the hosts and Argentina, but started attracting more attention after the two powerhouses endured disappointing starts. Argentina lost 2-0 to Colombia and Brazil was booed in a 3-0 win over Bolivia and a 0-0 draw against Venezuela.

"You have to wear that favourite tag if that's what they put on you," said forward Edinson Cavani, who scored one of the goals against Ecuador on Sunday. "It's good that they give you that tag."

Luis Suarez, Cavani's partner in Uruguay's dominant attack, also scored in the opening win that left the team tied with two-time defending champion Chile at the top of Group C with three points. The Chileans face Ecuador on Friday in Salvador.

Before the tournament, Uruguay captain Diego Godin said that calling Uruguay a favourite "made no sense" and "contributed nothing" to the squad.

Left back Diego Laxalt said the role of favourite was something temporary.

"It depends on who's playing better at any given moment," the AC Milan player said. "We played well and scored many goals, but that doesn't really mean anything."

Uruguay will be heavily favoured against Japan, which brought to Brazil a young squad focused on the Olympic tournament at home next year. The Japanese opened their Copa America campaign with a 4-0 loss to Chile on Monday.

"We can't think that we are going to have an easy match," Laxalt said. "We need a good result to keep improving and to stay on track for the title."

Uruguay's 15 Copa America titles are one more than Argentina. Its last victory came in 2011.