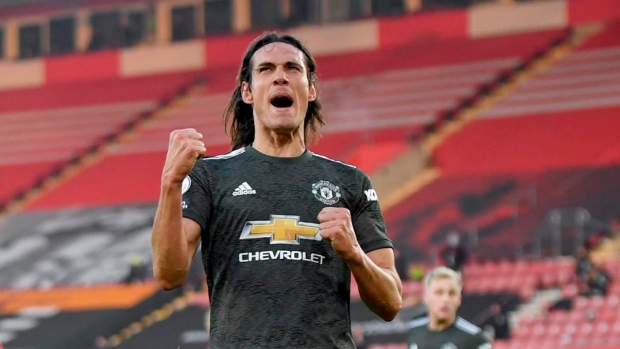 The Uruguay international had been weighing the option of returning to South America with Boca Juniors interested in his services.

“Over the season, I have developed a great affection for the club and everything that it represents," Cavani said in a statement. "I feel a deep bond with my teammates and the staff who work behind the scenes here. They give me extra motivation every day and I know that, together, we can achieve special things."

Cavani is in his first season in England, having signed for United last fall after the expiration of his contract with Paris Saint-Germain.

In 35 appearances across all competitions, Cavani has 15 goals, including eight in his last seven appearances.

Cavani's goal in Sunday's 3-1 win over Aston Villa was his fifth coming as a substitute in the Premier League, tying the club record jointly held by Javier Hernandez and manager Ole Gunnar Solskjaer.

“Edinson is one of the last to leave the training ground and sets the tone for the upcoming youngsters with his approach to his profession every single day," Solskjaer said in a statement. "I have always wanted him to stay and experience the way our fans will respond to him as a player, and this means he will hopefully get that opportunity.”

In his 16th professional season, Cavani has also spent time with Palermo and Napoli.

Internationally, he's been capped 118 times by the Uruguay senior team.