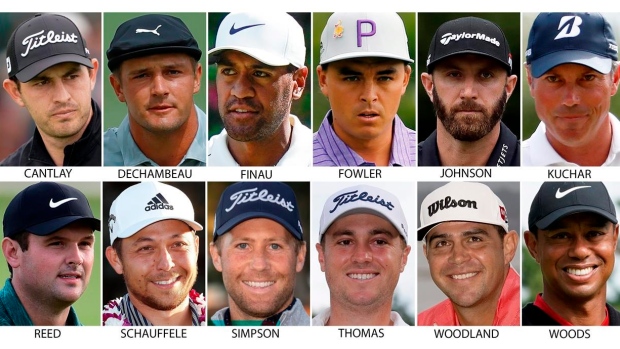 A capsule look at the U.S. team for the Presidents Cup. Players listed in order of how they made they team:

Noteworthy: Thomas, who has won twice in his last five starts, has compiled a 7-2-1 record in his team competitions.

Noteworthy: Johnson has arthroscopic surgery on his left knee to repair cartilage damage on Sept. 5. This will be his return to competition.

Noteworthy: This is Cantlay's first team competition since the 2011 Walker Cup.

Noteworthy: Schauffele was left out as a captain's pick for the Ryder Cup last year. His four victories include the Tour Championship and a World Golf Championship.

Noteworthy: Simpson is among four Americans who played at Royal Melbourne in the 2011 matches. He went 3-1-0 in team play with Bubba Watson and lost in singles to K.T. Kim.

Noteworthy: DeChambeau made his pro team debut in Paris and went 0-3. In two foursomes matches with Phil Mickelson, they lost both on the 14th hole.

Noteworthy: His only PGA Tour was the Puerto Rico Open in 2016, held the same week as the Dell Match Play in Texas. He went 2-1-0 in his Ryder Cup debut in Paris.

Noteworthy: He is among seven Americans on the team who have won major championships. Woodland is the oldest of the five U.S. newcomers to the Presidents Cup.

Noteworthy: He is making his sixth consecutive appearance in a Presidents Cup or Ryder Cup. In his last appearance, he complained to the New York Times about the leadership and pairings.

Noteworthy: Woods is the first playing captain since Hale Irwin in the inaugural Presidents Cup in 1994. This is his first time playing the Presidents Cup since 2013 at Muirfield Village.

Noteworthy: He was left out as a captain's pick, and then chosen to replace the injured Brooks Koepka. He went three months without playing until returning at the Hero World Challenge.