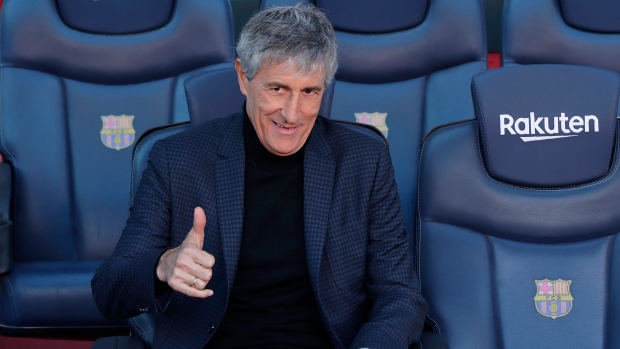 BARCELONA, Spain — Quique Setién lost his first game after three matches in charge of Barcelona as Valencia beat the defending Spanish champions 2-0 in a troubling day across the Spanish league which saw fans clash on the streets and a player racially abused.

Valencia striker Maxi Gómez scored once for Barcelona on Saturday and played a key role in producing an own-goal but also missed a penalty kick.

Barcelona hardly threatened to score in the first half at Mestalla Stadium and only got shots on goal from Lionel Messi when already behind.

Barcelona’s first defeat in 10 rounds means it will lose the league lead if Real Madrid takes a point or more at Valladolid on Sunday. Barcelona leads Madrid on goal difference.

Valencia went ahead through an own-goal by Jordi Alba in the 48th minute. Gómez’s volley was going wide but it deflected off the Barcelona left back and went into the net. Gómez made it 2-0 in the 77th, making up for his missed spot kick in the first half.

It was host Valencia’s first victory over Barcelona in 13 consecutive visits by the Catalan powerhouse.

Ultra fan groups from both clubs clashed before the match, tossing smoke bombs and chairs from bars onto a boulevard in Valencia. Both Valencia and Barcelona condemned the violence.

Espanyol's home match against Athletic Bilbao was also tainted by a clash between fans in the streets outside the stadium, as well as by an incident of racial abuse by some fans against Bilbao player Iñaki Williams.

The clubs and the league condemned the incidents.

Setién was brought in as Barcelona coach at the start of last week to replace Ernesto Valverde. The club wanted to give a boost to Barcelona’s attack which many believed had strayed from its traditional high-possession passing game under Valverde.

Valencia, however, was content to let Barcelona dominate possession and seek to hit on the break.

“We didn’t play well in the first half,” Setién said. “We were not in the right positions in some areas and did not understand what Valencia was doing. We made passes just to make them, but they didn’t gain us any advantages.”

The hosts outplayed Barcelona in the first half and were only stopped from going ahead before halftime by Marc-Andre ter Stegen. The Germany goalkeeper saved Gómez’s penalty in the 12th after Gerard Pique fouled José Gayá in the area. Ter Stegen also pushed the Valencia striker’s powerful shot onto his woodwork in the 29th.

Barcelona had difficulties keeping in check Gayá and other players who attacked down the flanks, with its new three-man back line deployed by Setién.

Messi mustered almost all of Barcelona’s chances except for a shot by Ansu Fati moments into the second half that went wide.

The visitors improved after Setién sent on substitute Arturo Vidal with Barca trailing by a goal. The midfielder combined passes with Messi to help set up two chances for the club’s all-time leading scorer with around half an hour remaining.

But even Messi was lacking his usually impeccable finishing touch.

Valencia finished Barcelona off when Gómez was left unmarked to beat Ter Stegen with a pinpoint strike after Carlos Soler’s dummy run drew off the last defender on a quick counterattack. Ferrán Torres then found Gómez all alone in the area to take his time to fire home.

Valencia pulled off its most impressive win under coach Albert Celades after starting without its two most important players.

Midfielder Dani Parejo was suspended and Rodrigo Moreno started the match on the bench before coming on in the second half amid rumours that Barcelona could be interested in acquiring the Spain striker to fill in for the injured Luis Suárez.

Besides Gómez and Gayá, holding midfielder Francis Coquelin stood out with his marking of Messi.

“We are very happy, beating Barcelona is very difficult and we played a good match,” said Celades, whose team moved into fifth place. “It was a great group effort. Everyone knows of the importance of Parejo and Rodrigo, but we are reinforced as a group by the win.”

Sevilla got first-half goals from Luuk de Jong and Manuel “Nolito” Agudo to beat Granada 2-0 and move into third place ahead of Atlético Madrid, which hosts Leganés on Sunday.

Raúl de Tomás scored in his third consecutive match since joining Espanyol in the winter transfer market in its 1-1 draw with Athletic Bilbao.

Espanyol moved out of last place but remained winless in all 11 league matches played at home this season.

Osasuna says that Argentine forward Chimy Ávila will undergo surgery after a medical exam confirmed that he tore a ligament in his left knee during Friday’s 2-0 win over Levante.

Ávila has been Osasuna’s best player this season, scoring 11 goals across all competitions.

Villarreal’s 19-year-old Fer Niño scored in the 89th, two minutes after going on to earn a 2-1 win at Alavés.