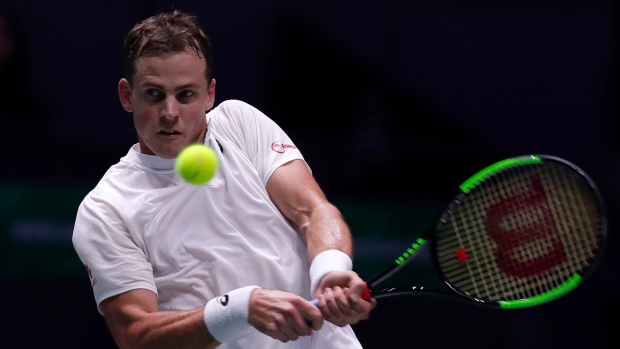 SOFIA, Bulgaria — Vancouver's Vasek Pospisil advanced to the semifinals of the Sofia Open indoor hardcourt tennis tournament with a 6-3, 6-2 win over sixth-seed John Millman on Thursday.

"That was pretty much as clean of a match as I could've played," Pospisil said. "The one thing I could be doing a little better is moving a bit better but, honestly, the serving, returning, striking the ball extremely cleanly, it was very close to a flawless match."

Pospisil, ranked 74th in the world, broke Millman four times on six chances to improve to 2-0 on the ATP circuit against the No. 38 Australian.

The 30-year-old Pospisil had five aces and won 73 per cent of service points in a match that took around one hour 13 minutes to complete.

Millman broke Pospisil once on three chances and won just 50 per cent of service points.

It was Pospisil's second win over a seeded opponent at the ATP 250 tournament. He defeated fourth-seed Jan-Lennard Struff in the second round.

"I'm feeling great and I'm playing great tennis," Pospisil said. "The best way to sum it up is the first comment I made to my coach when I had my first practice here. I was like, 'I should make this a stop on my schedule every year,' because I just liked how I was feeling the ball and I felt like these could be good conditions for me."