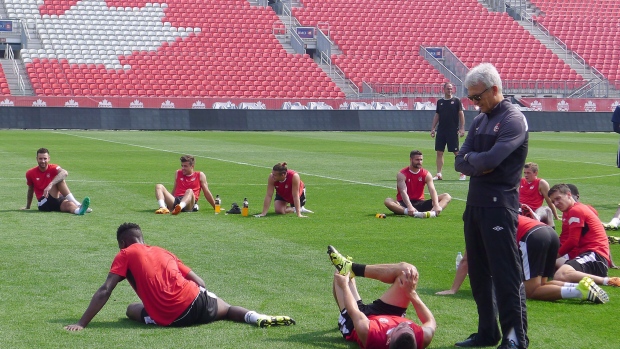 TORONTO - Benito Floro's team will open the next round of World Cup qualifying against Honduras, the team that ended Canada's chances of reaching the last tournament in brutal fashion.

The Canadian men, ranked 102nd in the world, open at home against No. 81 Honduras on Nov. 13 — likely in Vancouver.

Canada will then travel to face No. 107 El Salvador on Nov. 17 in the first round of play of the fourth round of CONCACAF qualifying, which will run from November to September 2016.

Twelve teams are left in the confederation covering North and Central America and the Caribbean in the penultimate round of qualifying for the 32-team World Cup in Russia in 2018.

They will play home and away matches with the other teams in their pool with the top two advancing to the final hexagon round.

The top three teams in the hexagon will qualify for the 2018 World Cup with the fourth-place team advancing to an intercontinental playoff against an Asian team.

Canada crashed out of contention in 2014 World Cup qualifying in an 8-1 humiliation at the hands of Honduras in San Pedro Sula in October 2012. The lopsided loss cost coach Stephen Hart his job.

Canada Soccer has called a news conference in Vancouver on Monday to "make an important announcement regarding Canada's journey towards the 2018 FIFA World Cup Russia through the fourth round of CONCACAF qualifiers."

That announcement is expected to be Vancouver hosting the Honduras game.

Floro's team had a bye in the first round of qualifying before dispatching No. 172 Dominica 6-0 on aggregate and No. 128 Belize 4-1 on aggregate.

While Floro conceded Mexico was a cut above, he said the other three teams in Group A will "have the same possibilities.''

Canada has tied its last three home games with the Mexicans and is 1-1-3 in its last five meetings on Canadian soil. But it is 0-12-2 in Mexico where it has been outscored 43-4.

The Canadian men have made it to the World Cup finals just once, in 1986.