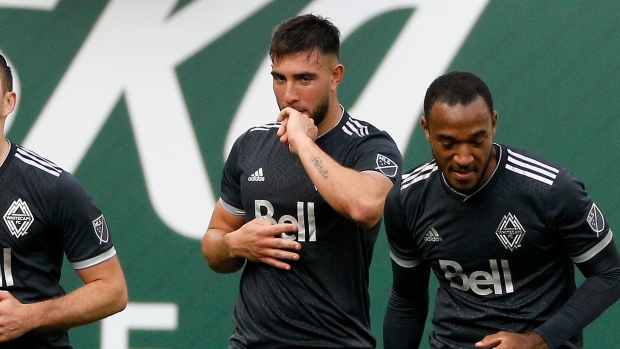 The Vancouver Whitecaps finished at the bottom of the Western Conference standings in 2019 with the second-lowest goals scored total in all of Major League Soccer.

In an effort to address one of the biggest problems that plagued the team last year, the Whitecaps made a huge splash in the off-season when they acquired Canadian international striker Lucas Cavallini from Liga MX side Club Puebla on a club-record transfer fee of $6 million to boost their attack.

Cavallini wasted little time proving to his new fan base that he is as advertised, scoring in four consecutive preseason games as he prepares to make his regular-season debut for the Whitecaps.

TSN soccer analyst Kristian Jack believes Cavallini is the man that a hungry fan base has been waiting for and the next step is for the Whitecaps to surround him with the pieces he needs to succeed.

“Lucas Cavallini is a finisher, he’s Canadian and he’s a star in Vancouver. That’s the key,” said Jack.  “The Whitecaps fans have been wanting Vancouver to spend money for two or three seasons and they’ve gone out and delivered. They’ve got the man that they wanted, a finisher that can be on the end of quality chances, now they’ve got to create those chances.”

While Cavallini arrives in Vancouver with a pedigree for both scoring and creating goals, TSN soccer analyst Steven Caldwell says it is important for the team to tailor their attack to best suit his skill set.

“It’s up to Marc Dos Santos to find a style of play, find players in wide areas who can deliver a service that Lucas Cavallini needs,” said Caldwell.  “There’s no doubt that 2019 was a disappointing season for the Vancouver Whitecaps in terms of the style that they played. They were too deep as a team. They’ve got to get up the field a little bit more and play to Cavallini’s strengths.”

In an effort to allow Dos Santos to spend his time focusing on the style of play needed to return the Whitecaps to the MLS playoffs for the first time since 2017, the team appointed Axel Schuster as their new sporting director, a position the team added this year.

He arrives from a three-year stint at Schalke 04, where he served as senior director of professional football for the Bundesliga side.

The move should allow the second-year manager to concentrate on improving the team’s 8-16-10 record from last season, which saw them outpace only expansion FC Cincinnati in the overall standings.

“I think it’s absolutely critical for Marc Dos Santos that he focus on being the head coach, I think he had too many hats on last season, through no fault of his own. He did that amicably, never complained and just got on with his job,” said Caldwell.  “I think there’s a real serious job here in terms of the head coach of the Whitecaps. There’s a lot of work to be done.”

To accomplish that work, the Whitecaps will turn to both returning veterans and new acquisitions.

Designated player Inbeom Hwang will also be counted on again in the team’s midfield in 2020 after joining the team last season.

Midfielder Cristian Dajome was added from Bogota FC and will join Cavallini to help boost the Whitecaps offence.

Veteran Goalkeeper Maxime Crepeau is another key member of the squad. He joined the team last season, posted five clean sheets and broke an MLS record with a 16 save performance in an Aug. 24 game against the San Jose Earthquakes.

“For me, in 2019 Maxime Crepeau was the best goalie in MLS and he’s never really going to get that credit south of the border,” said Jack.  “He’s become a leader for Vancouver. He’s matured on and off the field to no end and I also think he’s become a leader within the Canadian National team.  [The 2020 season] can be anything he wants it to be. I think it could lead to a point where he could be the undisputed number one for the Canadian National team going forward.”

With all of these changes, it could take time for the Whitecaps to jell into a cohesive unit and start their climb back up the standings.  Jack thinks it’s going to be a tough road back to the playoffs, but it’s something the team needs to be pushing towards.

“I think the pressure is there right now to start winning in Vancouver. I think, ultimately, last season was very poor for them. They recruited poorly and they didn’t play well enough and they have to go out there and deliver and they have to entertain a little bit more,” said Jack.

“The Western Conference is really competitive, there are some real giants in that Western Conference with those two teams in L.A. Portland and Seattle are always going to be very good as well. There are some really good signings across the board. It’s going to be very difficult to say that this team makes the playoffs, but that internally has to be the minimum requirement for the Whitecaps in 2020.