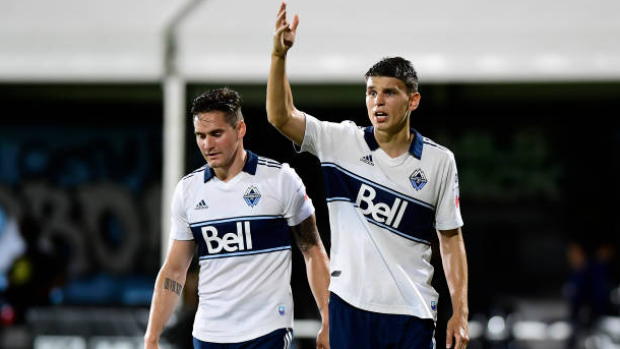 The undermanned Vancouver Whitecaps notched just one win in four outings at the MLS is Back Tournament.

But they generated plenty of excitement and leave Florida with their heads held high — and a young talisman in 21-year-old Saskatoon goalkeeper Thomas Hasal.

"My guys are fantastic," coach Marc Dos Santos said after Sunday night's penalty shootout loss to Sporting Kansas City. "The foundations of this group and the foundations of what we could be about, it's great. And I'm very excited to see what this group is going to look like when we're able to work with consistency with everyone."

Missing 11 players, the Whitecaps pushed Kansas City to the brink after the round-of-16 game finished 0-0 after 90 minutes at ESPN's Wide World of Sports in the Orlando area.

Despite being outshot 36-8 (8-5 in shots on target) and conceding 12 corners, Vancouver held firm with Hasal, the team's third-string goalkeeper, extending his shutout streak to 212 minutes since making his MLS debut in the July 19 game against Seattle when Maxime Crepeau was injured.

Hasal made some outstanding saves and stopped Daniel Salloi in Sunday's shootout, coming close to keeping Ilie Sanchez's shot out.

But only Leo Owusu converted his penalty for the Whitecaps with Cristian Dajome hitting the woodwork. Attempts by Derek Cornelius and Yordy Reyna were saved by Tim Melia.

Gianluca Busio, an 18-year-old with 34 MLS games already under his belt, delivered the coup de grace for the 3-1 shootout win.

Expected to be the first Canadian team to go home, the Whitecaps turned out to be the last to walk off the pitch in Florida.

"(A) very young team in the field today. Incredible professionalism, effort. We did everything we could," said Dos Santos. "And then penalty shots, it's 50-50 ... We're leaving this tournament stronger, that's for sure."

Forwards Lucas Cavallini, Tosaint Ricketts and Fredy Montero as well as veteran defender Andy Rose and midfielder Georges Mukumbilwa didn't travel with the team due to medical or personal reasons. Backup goalkeeper Bryan Meredith left the squad to be with his family in New Jersey after the death of his mother.

Vancouver had just six healthy players on its bench Sunday, half the number allowed.

Despite the growing list of absentees, the Whitecaps turned some heads.

Their roller-coaster tournament opened with a 4-3 loss to a tough San Jose side with the Quakes fighting back from 2-0 and 3-1 deficits. Ex-Whitecap Shea Salinas broke Vancouer hearts with the 98th-minute winner.

A 3-0 loss to Seattle was a low point. But with their backs to the wall, needing to win by at least two goals in their Group B finale against Chicago, the Whitecaps conjured up two second-half goals to advance to the knockout round with a 2-0 victory.

The Whitecaps' resolve at the tournament was shown by the fact they were outshot 110-27 (31-11 in shots on target) over the four games and conceded 31 corners while winning 11. Yet they were only outscored 7-5 with all seven goals against coming in the first two matches.

As the tournament wore on, the Vancouver players stuck to Dos Santos' game plan and came within a shootout of making the final eight.

There were five Canadian starters in Sunday's lineup and 10 in the 17-man matchday roster.

Owusu, a 23-year-old Ghanaian in his first season in MLS, proved to be a dynamic midfielder. Pushed farther up the field, Adnan proved to be a skilful provider. The Iraqi international was also designated as the team's emergency 'keeper Sunday, in case anything happened to Hasal with no backup on the bench.

While it was sometimes defending by the skin of their teeth, the young Whitecaps showed tremendous character and promise.

Hasal, with ice water in his veins, was a revelation. Dos Santos, while praising his young 'keeper, reminded him that he need to stay focused and away from social media.

"He needs to stay on Planet Earth," the coach added.

For those who didn't already know him, Dos Santos was a breath of fresh air. A mix of charisma and intensity, he tells it like it is.

"My job is to find solutions, not to find excuses," he said.

Returning home, Vancouver (2-3-0) now has to turn that promise into points after earning just three of a possible nine available at the tournament. The league is expected to try to resume some form of schedule in mid-August, which may be complicated for the three Canadian teams given the current status of the border.

"We're in the right direction as a club or a culture ... We will be a strong club, I'm very confident about that," said Dos Santos.

Like the other Canadian teams, the Whitecaps face a two-week quarantine upon their return.

This report by The Canadian Press was first published July 27, 2020.