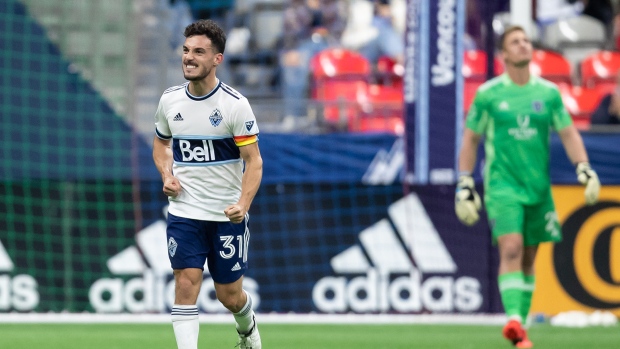 VANCOUVER — The Vancouver Whitecaps will continue their battle for a playoff spot after earning a crucial 2-1 victory over Sporting Kansas City on Sunday.

“It means that we’re still in the fight and we’re going to fight until the end," interim coach Vanni Sartini said of the result.

Heading into the matchup, the 'Caps (10-9-10) knew the stakes — the three teams the club is chasing for a playoff spot (Minnesota United, the L.A. Galaxy and Real Salt Lake) all won on Saturday, so a loss to SKC would make Vancouver's dream of a post-season berth unlikely at best.

"Yesterday everyone won but it’s not going to happen every time that everyone’s going to win, our competitors, so we need to win and make more points to be at peace on (the last day of the regular season)," Sartini said.

"If we play like this and we keep working like this, the chance to celebrate on (the last day of the regular season) are higher than the chance that we’re pissed.”

Taking down Sporting (15-7-7), though, was no small task. The visitors sit second in Major League Soccer's Western Conference and were hungry to clinch their own playoff spot with a win or a tie on Sunday.

While SKC dominated 64 per cent of the possession across the game, shots were even at 9-9, with each side registering three on target.

The Whitecaps took a 2-1 lead into halftime, thanks to goals from Ryan Gauld and Russell Teibert, and a pair of assists from Brian White.

Sporting pushed for an equalizer late and the club's best second-half chance came in the 85th minute after Whitecaps defender Jake Nerwinski was booked for a hard tackle on Graham Zusi.

Kansas City was awarded a dangerous free kick, but Whitecaps 'keeper Maxime Crepeau snatched the ball from mid air before SKC could do any damage in the penalty area.

Russell cut into the Whitecaps' lead in the 43rd minute. The Scottish winger's shot from the top of the box beat Crepeau to the bottom left corner of the net to make it 2-1.

Russell has now scored in six straight games for SKC.

Teibert put Vancouver ahead 2-0 in the 37th, taking a nice pass from White at the top of the box and blasting a long left-footed shot under the arm of the diving Melia.

“I think we have unselfish players all around the team," Teibert said. "I think we’ve shown throughout the entire season that goals will come from anywhere. It was just my night tonight.”

The goal was a long time coming for the Whitecaps captain — the last time he scored was in Vancouver's 2-1 victory over Toronto FC on Oct. 6, 2018.

The 'Caps first goal of the night followed a beautiful play by midfielder Leonard Owusu, who performed some fancy footwork to hold on to the ball in heavy midfield traffic.

Javain Brown then sent a cross in to White at the back post and the American striker headed it into Gauld's path. The Scottish attacking midfielder rocketed a left-footed shot past Melia to open the scoring 23 minutes in.

“It was a good cross from Javain, his left foot. It’s actually a bit surprising," Gauld said of the play. "And then Brian just showed his intelligence. I think it would have been a little bit difficult to score a header from there. Thankfully he knocked it down for me and left me with an easy enough finish.”

The goal was Gauld's third of the season and he nearly added to his tally moments later, sending a shot just wide of the right post.

Despite the victory, Vancouver remains a single point outside of a playoff spot with five games to go in the regular season. Their next chance to climb the table comes Wednesday when they battle the Timbers in Portland.

The Whitecaps have missed the post-season three years in a row, but the entire club believes a run is possible this season, Teibert said.

NOTES: Whitecaps defenders Erik Godoy (foot) and Ranko Veselinovic (groin) both returned from injury. … A crowd of 10,990 took in the 'Caps eighth annual Pride match. … White has had a hand in Vancouver's last eight goals, scoring six and assisting on two. … The Whitecaps are now 6-0-1 at B.C. Place this season.