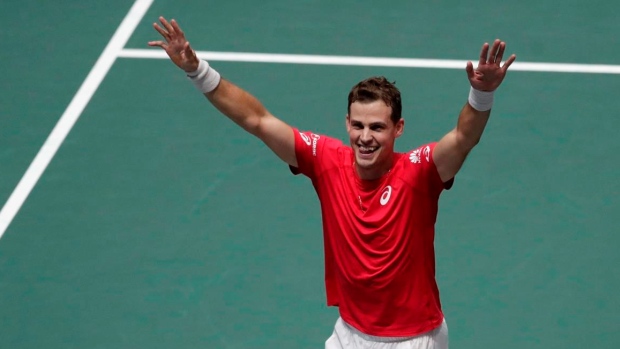 The 29-year-old from Vancouver is in the field Feb. 24 to March 1 for the Calgary National Bank Challenger, organizers announced Monday.

The world No. 146 missed the first half of the 2019 season after undergoing back surgery.

However, upon his return Pospisil helped Canada finish second in the Davis Cup Finals.

Pospisil, who was scheduled to make his 2020 debut Monday in New Zealand, won three singles matches against a trio of higher-ranked opponents in November's Davis Cup in Madrid.

The ATP's Challenger Tour is considered the second-highest tier of men's tennis behind the main tour.

It is the proving ground for players aspiring to get into the main draws of ATP Tour tournaments, but also a place where established pros can regain their form post-injury.

Pospisil won Challenger events in both Charlottesville, Va., and Las Vegas prior to the Davis Cup final.

He reached a career-high singles ranking of No. 25 in 2014, when he also claimed a men's doubles title at Wimbledon with American teammate Jack Sock.