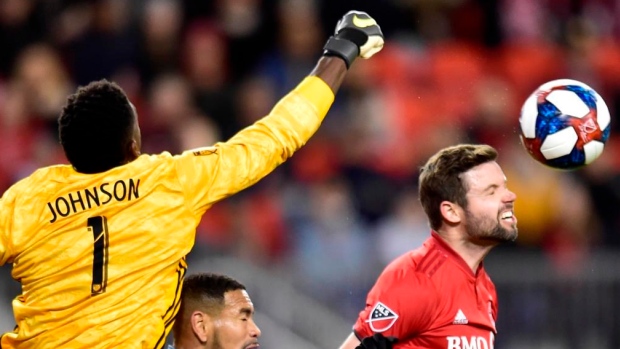 The Rapids confirmed Wednesday that the 35-year-old free agent, who played in Colorado from 2009 to 2015, has signed a one-year contract. The move reunites Moor with Colorado coach Robin Fraser, a former Toronto assistant.

"Drew is someone who has meant so much to this club and we couldn't be happier to welcome him home," Colorado GM Padraig Smith said in a statement. "His championship-winning experience and familiarity playing for Robin (Fraser) will be a huge asset in our locker-room, especially for our young group of players."

Moor made 108 appearances in all competitions in his four seasons with Toronto: 78 in the MLS regular season, 12 in the playoffs, 10 in the Canadian Championship and eight in the CONCACAF Champions League.

Colorado has always been dear to Moor, however. He won the MLS Cup in 2010 with the Rapids, whom he captained for three seasons. He also met wife Shelby there. The couple now have two sons, both born in Canada.

"It's been a pretty amazing last 24 hours or so," Moor said in a social media video posted by the Rapids. "And ever since we left Colorado and the Colorado Rapids, it's been in a special place in our hearts and so we can't wait to get back."

TFC quickly put out a tribute video, calling Moor "a champion and legend on and off the pitch." In the video, Moor called coming to Toronto a "life-changer" and said TFC helped rejuvenate and refocus him.

"An incredible club and organization," he said.

While Moor remains one of Toronto's favourite sons, age and the salary cap were against him.

Moor's salary was the 10th-highest on the team payroll, according to the MLS Players Association.

"We didn't talk official numbers," said Toronto GM Ali Curtis. "We had talks with Drew and his agent about the future. We're very happy for Drew. Colorado is great for he and his family."

Moor played in 13 regular-season games in 2019, with Toronto opting for a centre back pairing of Mavinga and Gonzalez once Gonzalez arrived in July.

"Drew, from the second that he walked through those doors, has played a huge, huge role in everything that has gone on here," captain Michael Bradley said at the club's season wrapup Nov. 13. "His personality, his enthusiasm every single day for the game, for his teammates, you can't ask for a better guy.

"On a personal level, the way that he helps me get messages across, make sure everybody's in the right way, that part's huge ... I always knew that he was going to make sure that everybody was with us and that we're all on the same page."

Moor had hoped to remain in Toronto.

A smart reader of the game and a good communicator, Moor made everyone better around him. At the other end of the field, he is a threat in the air on set pieces with 27 career goals.

He was one of four key signings that off-season, along with goalkeeper Clint Irwin, fullback Steven Beitashour and Canadian midfielder Will Johnson.

But it was Moor whom then GM Tim Bezbatchenko called "a key piece in the puzzle.''

With Moor marshalling the backline, Toronto's goals-against total dropped from a league-worst 58 in 2015 to 39 in 2016. TFC made it to the MLS Cup final, only to lose to the Seattle Sounders via penalty shootout. Toronto and Seattle met again in the 2017 championship game, with Toronto winning 2-0.

Moor started in both finals. But he did not dress for the 2019 championship game in Seattle, dropping out of the matchday 18 when striker Jozy Altidore returned from a quad injury.

Moor began his career with FC Dallas, who took him sixth overall in the 2005 MLS SuperDraft. He made 128 appearances in the regular season and playoffs for Dallas before being traded to Colorado.

Toronto coach Greg Vanney played alongside Moor, then a rookie, back in 2005 at FC Dallas. Vanney, who was in his 10th year as a pro at the time, says Moor plays the game "between his ears.''

Moor spent close to seven seasons with the Rapids and helped Colorado defeat FC Dallas 2-1 after extra time in the 2010 MLS Cup final at BMO Field.

Moor played college soccer at Furman University before switching to Indiana, where he won NCAA championships in 2003 and 2004. He earned five caps for the U.S.

"He's a player who has been a mainstay in the league for so long and every team he’s been on has been successful," said Fraser. "His leadership and championship-winning experience will be extremely important to us moving forward."