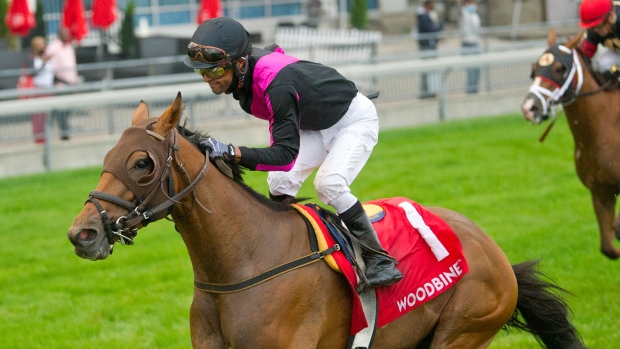 TORONTO — It was a Breeders' Stakes to remember for jockey Patrick Husbands and unheralded British Royalty.

Husbands rode the 24/1 longshot to an emphatic four-length victory in the $400,000 turf race at Woodbine Racetrack on an overcast Sunday afternoon.

It was Husbands' record fifth Breeders' win and marked British Royalty's first trip to the winner's circle this year, coming roughly a month after a rather unspectacular eighth-place finish in an allowance race at Woodbine.

"Well, you know, it's just another platter," Husbands said. "I am very proud of myself.

"He ran the way I expected he'd run.”

Winning trainer Barb Minshall, who also co-owns the horse, praised Husbands for the trip he provided starting from the No. 1 post in the 12-horse field.

"I thought Patrick gave a great ride," she said. "I was glad to have the fence because I figured we could save ground the whole way around.

"I was so confident in the horse's ability to get the trip. I'm just really happy."

Minshall lost British Royalty to a claim July 11 but was able to claim him back July 24. She said Sunday's win was one of the most rewarding of her career.

"I was looking to win a race, and I took a chance, and I was very upset with myself for taking such a chance," Minshall said. "And lo and behold, the horse is back in the next time, he runs two weeks later, and I couldn't get in there fast enough to get him back.

Husbands and British Royalty made a steady progression throughout the race. After starting in seventh, Husbands had the horse sitting sixth after a half-mile and fifth behind leader Safe Conduct, the Queen's Plate champion, through three-quarters of a mile.

Husbands moved British Royalty into the lead down the stretch and the three-year-old gelding had more than enough left to finish the 1 1/2-mile race in two minutes 34 seconds on a yielding turf.

Safe Conduct was back at Woodbine following his Plate victory Aug. 22. Safe Conduct didn’t run in the $400,000 Prince of Wales at Fort Erie Racetrack on Sept. 14 as the 1 3/16-mile dirt race was won by Haddassah.

That left Wando, who was ridden by Husbands, as Canada's last Canadian Triple Crown champion in 2003.

Wilson took Safe Conduct to the lead out of the starting gate, and had the son of Bodemeister there down the stretch. But instead of hanging on, Safe Conduct faded badly.

"It (the trip) went according to plan," said Wilson, who won the '07 Plate aboard Mike Fox. "We got a lot of rain overnight and that course is soft, it's yielding going and it's trying and testing.

"Everything went the way we expected and hoped. He settled into my hands nice for an easy arrhythmic pace down the backside, I couldn't have asked for better, we just weren't the best horse on the day."

"He's fantastic, I've followed him since last year." she said. "The trainer (Phil Serpe) had asked me about riding him when he was a two-year-old, so I've been keeping close tabs on him ever since.

"So kudos to them, congratulations on winning the Plate, I was hoping to get them another jewel of the crown, but it wasn't our day today."

This report by The Canadian Press was first published Oct. 3, 2021.