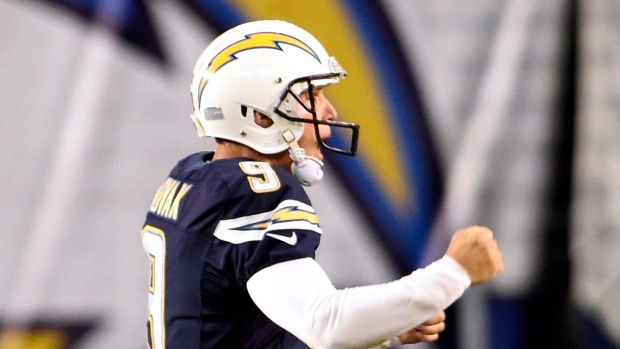 Novak, the second-most accurate kicker in franchise history, was among the moves as the Chargers had to get to the NFL's 53-man roster limit.

Novak lost out in a spirited competition with undrafted rookie Josh Lambo.

But the Chargers were impressed with Lambo's accuracy as well as his leg strength. Lambo consistently had more distance on his kickoffs than Novak and that appeared to swing the decision in his favour. His game-winning 47-yard field goal to beat the Arizona Cardinals in a preseason game on Aug. 22 also was a factor.

Lambo, a second-team All-SEC selection last year at Texas A&M, was drafted eighth overall in the 2008 MLS draft by FC Dallas. When injuries derailed his soccer career, he turned to football.

Guard Jeremiah Sirles, who spent most of last season on the team's practice squad, was traded to the Minnesota Vikings for a 2016 sixth-round pick.

Pro Bowl tight end Antonio Gates, who will miss the season's first four games, was put on the suspended list.