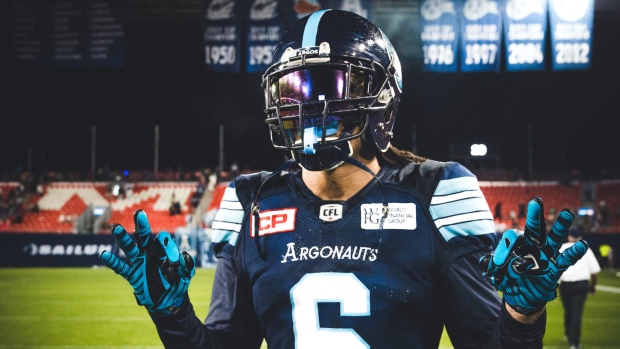 The veteran linebacker says he's been medically cleared to resume running and cutting after suffering a season-ending knee injury last year with the Calgary Stampeders. Ball remains part of an impressive group CFL free agents but remains intent on playing in 2020, whenever that might be given the uncertainty created by the COVID-19 pandemic.

"I'm ready to roll," Ball said via telephone from his off-season residence in Atlanta. "I have dreams of hoisting another trophy so I have to do what I have to do to get to that point.

Ball's '19 campaign ended shortly after it began. The six-foot-one, 220-pound linebacker signed with Calgary on Oct. 1 but was hurt in his first game with the Stampeders.

"I'm fine," Ball said. "The doctor has cleared me for running and cutting and all that good stuff.

But Ball admitted the injury did test his resolve early on.

"I was very disappointed in myself because of the situation, down on myself for the first two days," he said. "But at the same time I started rehabbing and working right away and that got me to where I am now.

"It was a bummer but I'm the kind of guy who can take on a story like that and make it a success story, a testimony. That will be part of my testimony to get me where I'm going. That won't stop me."

Football has taken the married father of a seven-year-old daughter and three-year-old son to various teams on both sides of the border.

Ball's pro career began with the Toronto Argonauts (2012-13) before spending the next three seasons in the NFL with New Orleans, Carolina, Jacksonville and San Francisco.

Receivers Armanti Edwards and S.J. Green and offensive lineman Derek Dennis are also available after playing in the XFL.

And then there's the uncertainty surrounding the 2020 season. The CFL has postponed indefinitely the start of training camp due to the novel coronavirus outbreak.

The pandemic has forced Ball to be imaginative with his off-season workouts as gyms are closed. But the challenge hasn't been insurmountable because Ball also works as a personal trainer and has equipment at his home.

'I've had to dip into my bag of tricks of the trade," Ball said. "But I've always been kind of a solitary workout guy and my in-home training hasn't really changed.

"I've got the equipment I've always need — bands, weights, anything you could think about. I wake up every morning before the crack of dawn to get my miles in. I'm fine conditioning-wise."

The pandemic has also allowed the Ball family to spend more time together.

"We exercise together, we've had camping nights, homework and class work, board games, card games," Ball said. "We've had numerous movie nights, we've had Frozen 2 on repeat all week . . . and we actually have Frozen 2 monopoly game.

"You see where I'm going with it . . .but it's all good. We also have chalk drawings on the driveway and in the garage, anything you can think of, my wife and I are pretty much planning it up. This thing is making everybody spend more time with family, which is important and something I really enjoy."

But the pandemic has impacted Ball's off-season occupation and work as a coach of a seven-on-seven high school football team.

"I'm talking about 20-to-25 high school kids who love the game of football," Ball said. "Not seeing those guys and not being with the kids has been a bummer but at the same time we have Facetime, Instagram and TikTok so we kind of stay in touch.

"It's tough out here, man. That's not to say my story is worse than anyone else's. I know it's hard for everybody."

But the off-season has only served to strengthen Ball's football resolve.

"This is probably the hungriest and most motivated I've been in a while," Ball said. "I can't remember being this pissed off in workouts and training and preparations.

"To be honest with you, yes, I will be a hungry man walking into someone's locker-room. A healthy, hungry man."

This report by The Canadian Press was first published April 2, 2020.