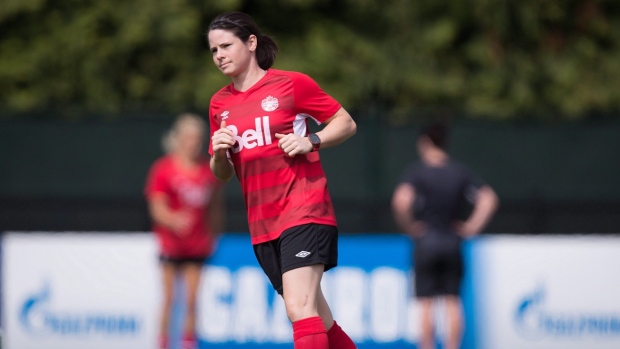 TORONTO — For Canada coach Kenneth Heiner-Moller, one of the takeaways from last summer's early exit at the Women's World Cup in France was the need to play more Tier 1 opposition.

The Canadians faced the best team on the planet earlier this month at the CONCACAF Olympic Qualifying Championship final, losing 3-0 to the United States after having qualified for the Tokyo Games with a semifinal win over Costa Rica.

Eighth-ranked Canada takes on No. 4 France on March 4 before facing the third-ranked Netherlands on March 7 and No. 9 Brazil on March 10 with all three matches at Stade de l'Epopee.

"It's going to give us some great insight on our players and who are actually already at the level where we can compete against Tier 1 opposition consecutively, like game to game to game. Not just one game but across games," Heiner-Moller told a media conference call Tuesday.

All three European teams are in season, unlike North America where the NWSL kicks off its season April 18.

"The three teams are different but what is obviously a common theme is the quality ... I'm super-, super-excited," Heiner-Moller added. "And I know we're going to have some great answers to some of the questions we've for right now."

The questions include which formations Canada can use effectively against elite opposition and which players are most adept at using them.

The Canadian women will face another top-10 opponent in No. 7 Australia in an April 14 friendly in Vancouver.

Heiner-Moller gets a boost for the France tournament in the return of veteran Diana Matheson from a one-year injury absence.

The 35-year-old Matheson won the last of her 203 caps in March 2019 at the Algarve Cup. The attacking midfielder from Oakville, Ont., was sidelined by a toe injury that required surgery. She was ruled out of last summer's World Cup, serving instead as a TV pundit.

She has missed the last 17 national-team games, during which the Canadian women went 10-5-2.

"This will be a great opportunity to see her in the environment — with our team but also against some of the best teams in the world," Heiner-Moller told a media conference call.

Matheson, he said, brings experience and a "soccer brain (that) is pretty massive."

"She understands the game ... She knows the game from different perspectives and positions," he said.

Heiner-Moller has named the some roster he used in the CONCACAF Olympic qualifier plus Matheson and defender Vanessa Gilles.

The Canadians are 9-1-3 against the Dutch with the lone loss (2-1) coming last time out in group play at last summer's World Cup. Captain Christine Sinclair scored in that game, marking the fifth World Cup she has scored in — a record.

Canada is 8-8-6 all-time against Brazil. The Canadians won when the two teams met for the bronze medal at the Rio Olympics, but Brazil triumphed 4-0 last time out when they met in a tournament in China in November.

Seventeen of the 22 Canadians on the French tournament roster were part of the team that won bronze at the 2016 Rio Olympics. Matheson, Sinclair, Sophie Schmidt and Desiree Scott were also bronze medallists in 2012 at the London Games.

Excluding Matheson and Gilles, 20 players on the squad were part of the World Cup roster in France.

It's the first outing for Canada since the Olympic qualifier that saw Sinclair set the world's all-time international scoring record with her 185th goal on Jan. 29 in Edinburg, Texas.

The 35-year-old from Burnaby, B.C., is also Canada's leader in international appearances at 293.

Matheson is no stranger to injuries.

She won the battle to make the 2015 World Cup roster after tearing her anterior cruciate ligament in a 3-0 friendly loss to Japan in October 2014. Named to the team, she was an unused substitute for the first four games before starting the quarterfinal loss to England.

Matheson had knee surgery to repair torn cartilage in her knee in November 2011. The recovery time was longer than expected but she recovered to play in the 2012 Olympics, scoring the decisive stoppage-time goal against France.

Prior to the 2019 Algarve Cup, Matheson was not summoned for a camp in Spain and friendly win over Norway as an injury precaution. Matheson had played at the CONCACAF World Cup qualifying tournament in October 2018.