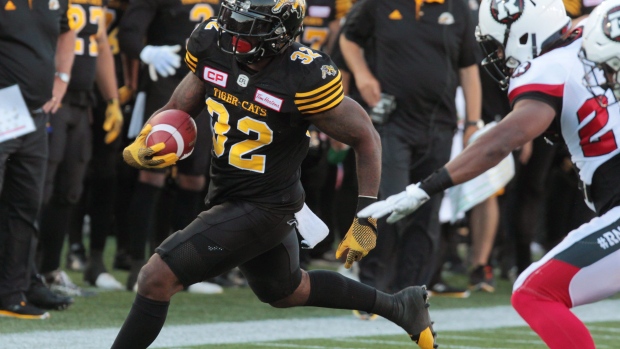 C.J. Cable is hanging up his cleats.

The veteran running back signed a one-day contract with the Hamilton Tiger-Cats on Thursday and announced his retirement as a member of the team.

“C.J.'s abilities to run and catch the football were impressive, but his willingness and execution of blocking made him a complete back," Ticats head coach Orlondo Steinauer said in a statement. "He dominated at times and was a tremendous competitor who could get those tough yards. We're honoured that C.J. has chosen to retire a Ticat and wish him and his family all the best in life as they forge ahead.”

Twice a CFL East All-Star, Gable won the Frank M. Gibson Trophy in 2013 as the East Division's most outstanding rookie.

“All gas no breaks defines my football career perfectly," Gable said in a statement. "From the seven-year-old boy who was hungry to learn and be the best, to the 33-year-old man who realized that football actually isn’t everything, I’ve learned a lot from the game that has made me the man I am today. The early mornings, long nights, endless treatments, constant film viewing, and the blood, sweat and tears I put into it has given me life lessons that I will forever have instilled in me. Moving on to the next chapter in life is going to be a brand-new feeling. I am ready to press on the gas a little harder and keep going."

A native of Sylmar, CA, Gable was a product of USC and also spent time on the practice rosters of the New Orleans Saints and Denver Broncos.