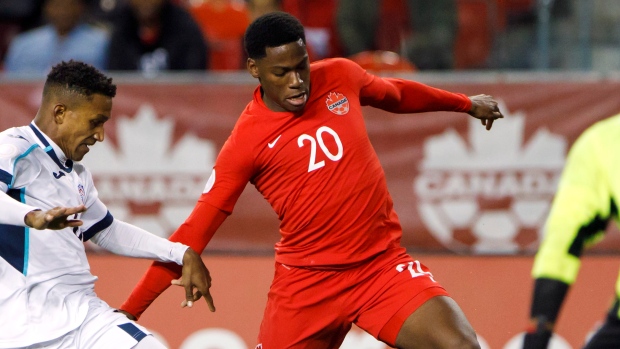 TORONTO — At 30, Scott Arfield is one of the greybeards on the Canadian men's soccer roster.

And with more than 400 games under his belt with Falkirk, Huddersfield Town, Burnley and Glasgow Rangers, Arfield has been around the soccer block.

Asked about the developing talent around him in Canadian colours, the Scottish-born Arfield smiles.

"They're just so young," he said. "I've said it so many times, they're so innocent — innocent under the pressures and the demands of football, which at times is a wonderful thing to have because you can play so free and fearless."

Teenage forwards Alphonso Davies and Jonathan David are Exhibits A and B on John Herdman's team. Davies is 18, finding his way with German giant Bayern Munich. David is 19, potting goals for KAA Gent in Belgium.

Despite his experience and know-how, Arfield says the relaxed attitude of Davies and David rubs off.

"It only helps players like myself, Steven Vitoria and Milan (Borjan) — the older veterans on this team — helps us loosen up and play with the no-fear of the young ones."

The 32-year-old Vitoria plays for Moreirense in the Portuguese top flight. The 31-year-old Borjan is currently backstopping Red Star Belgrade in Champions League play as well as the Serbian first division.

They have seen the good and bad of football. Borjan, for one, spent time with teams in Argentina, Uruguay, Turkey, Romania, Bulgaria and Poland before returning to join his beloved Red Star Belgrade in July 2017.

In contrast, David was playing for Ottawa-area teams and the Canada under-17 squad when he secured a trial with Gent in 2017 after a scout saw him on video. Today, he is starting for the Belgian side and drawing attention from bigger clubs for his scoring touch.

Fearless on the field, David is as cool as a cucumber off it.

Asked if being born in the U.S. adds any incentive to facing the U.S. in CONCACAF Nations League play, David answered like a seasoned pro.

"No, it doesn't make a difference. It's a game and we want to win. Simple," said David, who was three months old when his family left the U.S. for Haiti and six years old when they came north to Ottawa.

Thirteen of Canada's 23-man roster for the U.S. game Tuesday are 24 or younger. None of the Canadians were alive in 1985 when Canada last beat the Americans — 2-0 in a Vancouver friendly.

Time for a change, says David.

"We know right now we have a good group and this is the perfect moment," he said.

It's music to Arfield's ears.

"It's a wonderful thing to have, because as you get older you gets these demands thrown at you," he said. "I remember when I was a young player, I played with that freedom. You obviously know the other side as you get older and human nature tell you about the bad things rather than the good things."