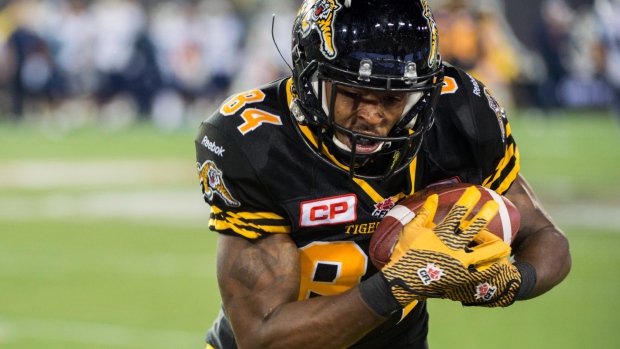 After eight seasons in the CFL, veteran wide receiver Bakari Grant announced his retirement on Friday. As part of his announcement, Grant, who spent five seasons with the Hamilton Tiger-Cats, signed a one-day contract with the Tiger-Cats to retire with them.

Grant made the following statement regarding his retirement:

“I want to start by saying thank you. Thank you to all of my teammates, coaches, every under-appreciated staff member that makes the football machine operate, and the entire Ticats organization, especially Bob Young and Scott Mitchell. I have so much love and appreciation for the CFL and for all the people I've met over the last eight seasons. I am forever grateful to the entire country of Canada that has afforded me an eight-year football career, two Canadian children and countless life lessons. I also want to take this time to thank all of my friends and family. Without their love, support and understanding, my football career would've never existed. Football has taught me so many lessons and I look forward to extending that experience into every aspect of my life moving forward. Last and definitely not least, I want to give a special thank you to the entire city of Hamilton. To the Tiger-Cats fans, you are amazing and words can't describe how much I appreciate every person I've met, talked to, exchange stories with and learned from! I've been on other teams but I will always bleed Black and Gold and I’m honored that I will forever be a Ticat. Oskee Wee Wee and one for the road, even though I know Bob Young wouldn’t approve, Argos SUCK!”