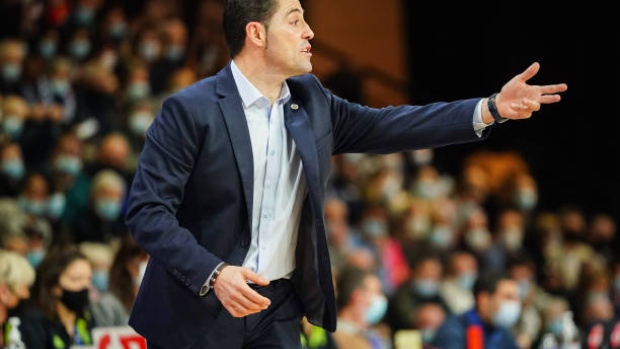 The Canadian women open their World Cup qualifying campaign next month against a tough group in Osaka, Japan, and Lapena must not only assemble a squad, but build chemistry, cohesiveness and a style of play among players he doesn't know.

"I'm not a wizard, for sure. It’s not possible to say 'Hey, come on, let’s go to play Victor Lapena basketball,'" Lapena said on a conference call Thursday. "No, this is very difficult."

The 46-year-old from Zaragoza, Spain is a longtime coach with the Spanish women's program and also has a wealth of professional coaching experience. Now he's been tasked with leading Canada through the 2024 Paris Olympics.

Their hirings are the culmination of a global search by Canada Basketball to replace Canadian Lisa Thomaidis, who agreed to part ways with the national organization when her contract expired after the Tokyo Olympics. She had been with the program for nine years.

Bringing in an international coach is a departure for the Canadian women's program, after long stints by Canadian women such as Thomaidis and her predecessor, Allison McNeill.

The Canadian team presented a "new adventure" in his career, Lapena said, calling Canada "one of the best."

"And now I am part of this program and I will do my best to push the national team to the next level," he said.

While Lapena doesn't have a lot of time to get to know his new team — and Canada likely won't have NCAA players such as Laeticia Amihere and Aliyah Edwards available next month — he said he's relying on Baur and Clarke, who were both assistants under Thomaidis and know the players well.

"To know the players in one or two days is very difficult, but the information I'm going to receive about them is as a player, as a person, as a teammate," he said. "So, I will try to mix all the information I have to create good correlation between them, to play simple basketball, and to try to have the best game plan to give problems to our rivals.

"In one month, we will see the result. It is very difficult, but I love it, this is what I love to enjoy and to live."

Canada had high hopes for the Tokyo Olympics, arriving in Japan with a program-high No. 4 world ranking. But COVID-19 had kept the team from practising together for the better part of 18 months, and they were eliminated in the preliminary round at the Games.

"Post-Tokyo we did get some feedback from the athletes, and some valuable feedback," said Denise Dignard, Canada Basketball's women's high performance director. "The priority was to find a head coach with top-level professional and international women's basketball coaching experience and success, so we found a candidate in Victor that exceeds our expectations in both that pro and FIBA experience and success."

Quinn has been with Seattle in a variety of coaching roles since retiring as a player in 2018, joining the Storm as an assistant coach in 2019 before becoming associate head coach for the 2020 season where she helped lead the team to their fourth WNBA championship in franchise history.

Quinn said the key to developing chemistry quickly is "keep it simple."

"Everyone is in different areas playing on different clubs, and the biggest thing that I've learned coming in as a player and even as a young coach, sometimes as coaches you try to over analyze and think a lot, but simplicity is key," she said. "We have a lot of great people, a lot of great players, and that's the easy part, bringing them all together, but strategically you can't overdo it, you have to simplify things, play hard and be competitive and just go all out."

As a player, Quinn was selected fourth overall in the 2007 WNBA Draft by Minnesota and appeared in 400 games over 12 seasons with the Lynx, Los Angeles Sparks, Washington Mystics, Seattle Storm and Phoenix Mercury.

Canada Basketball president and CEO Michael Bartlett was asked if they specifically sought out an international coach, and whether there were Canadians in the running.

"Certainly as we refined the criteria for our head coaching search, the pro and international women's head coaching experience was really at the top of the list. And the reality of that situation is that the Canadian coaching tree right now isn't deep with that experience," Bartlett said.

He believes Canada has found the right mix in Lapena's experience in Spain, Quinn's WNBA resume and "Carly and Steve's experience" with the current national team.

Bartlett said a focus going forward will be to develop the next generation of Canadian coaches, so in a similar search down the line, Canadians will have the pro and international experience to be part of the candidate pool.

"That's on us as a federation to make sure of that," he said. "We can't just expect people to achieve it. We have to invest in them to be able to do so."

Canada is in Group C for the FIBA World Cup 2022 qualifying tournament and will play Japan, Bosnia and Herzegovina, and Belarus in mid-February in Osaka.

Dignard said with the crush of COVID-19 cases around the world, players will be kept in virtual bubbles. She expects to hear more details from FIBA next week.

Three teams from each tournament will advance to the FIBA Women's Basketball World Cup 2022 in Sydney.

This report by The Canadian Press was first published Jan. 6, 2022.