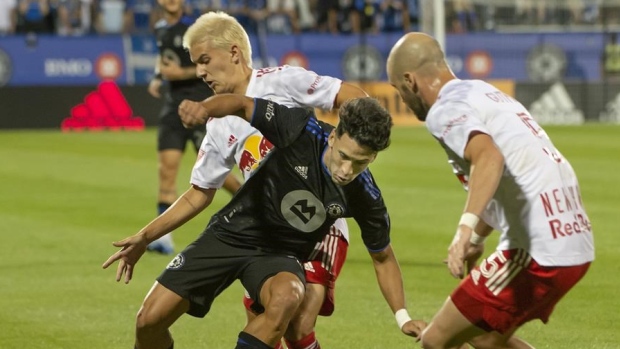 MONTREAL — They say if at first you don’t succeed, try, try again. And it was third time’s the charm for CF Montreal.

It was Montreal’s third penalty attempt in a four-minute span after the first two kicks were called back for encroachment by the New York goalkeeper.

“People can look at the penalty kick call a few different ways,” said midfielder Djordje Mihailovic. “As an attacking player, you want the referee to give you the call. I know the scenario was a bit unusual. I’ve never played a game where you take a penalty kick three times.

“At the end of the day, as long as the ball goes in and we get three points, it doesn’t matter to me.”

Johnsen's attempt was saved by 'keeper Carlos Coronel, but after video review, Chapman deemed the Red Bulls goalkeeper was off his line.

Mason Toye then stepped up for the penalty re-take, and again Coronel made the save. But for the second time, Chapman determined Coronel encroached.

Roughly four minutes after Johnsen took the initial penalty, Wanyama made no mistake on Montreal's third try from the spot. Coronel got a hand on the powerful shot that sailed into the top corner of the net.

The win was CF Montreal's first since July 17 against Cincinnati.

“It was a crazy end to the game and it's a textbook case of being calm and cool,” said coach Wilfried Nancy. “I told the players at halftime, in all honesty, that I knew we could win this game.

“In any game, but especially situations like that, it’s important to keep your cool and that’s something that should be worked on.”

There seemed to be extra motivation in the match, from both sides, given that Montreal (7-7-5) and New York (5-9-4) were eighth and ninth respectively in the Eastern Conference entering the game.

Both sides lined up in mirroring 3-4-1-2 formations leading to an understandably quiet start to the game.

As the first half progressed, Montreal started imposing its will and got the best chance of the half.

Toye dribbled into the 18-yard box and put the ball on a platter for Zachary Brault-Guillard, who fanned on the shot and put it right into Coronel’s hands.

Chances kept coming for the home side when both Mathieu Choiniere and Mihailovic saw blistering shots narrowly miss the target.

Despite the pressure, first blood went to New York, which converted a penalty in the third minute of first-half stoppage time.

Against the run of play, a sloppy tackle from Aljaz Struna took down Andrew Gutman in the box. Patryk Klimala slotted the spot kick into the bottom right corner, giving New York the lead.

The goal did little to deflate CF Montreal though. They came out firing in the second half.

“At halftime, everyone was positive, there was no panic among the team,” said Montreal defender Kamal Miller. “We knew no matter how long it was going to take to get a goal, that it was coming. We knew we were going to be OK.”

Sending wave after wave of attacks, the best opportunity to equalize came in the 69th minute when Joaquin Torres played a perfect ball in to Toye, who put it wide from 12 yards out.

It only took two minutes for CF Montreal to rectify their near misses as Sunisi Ibrahim finished an acrobatic header from point blank range in the 71st.

“When we spoke before he went in, he seemed very motivated,” said Nancy of Ibrahim. “You could sense that an equalizer was coming.

“I’m really happy with the guys and the way they refused to let up. We kept attacking their back line and it paid off. Everyone’s game was superb and I’m proud about how the guys weren’t afraid to lose.”

Montreal doubled down on the attacking approach in a bid to get all three points, which proved the right tactic given Wanyama's late heroics from the penalty spot.

New York’s next opponent will be the Columbus Crew on Aug. 18 while CF Montreal faces FC Cincinnati that same day.