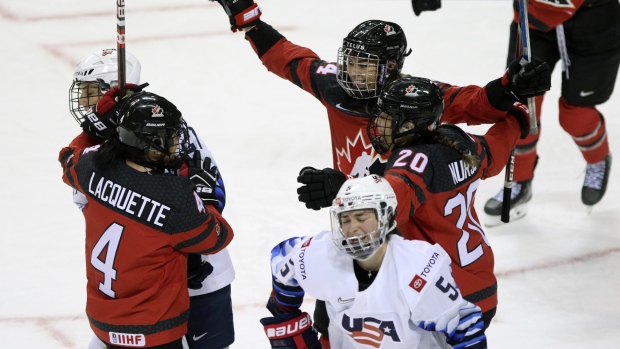 Bach's backhander on a 2-on-1 pass from Blayre Turnbull at the 3:22 mark beat U.S. netminder Nicole Hensley, who faced a Canadian onslaught in the extra frame.

"That entire game was a battle," said Bach, from Milton, Ont. "We got down by one goal, but we pushed back. We're going to fight and stick together as a team and I think it was awesome to get the chance to go out in overtime and score a big goal."

The Canada-USA Rivalry Series was at full intensity Monday at Victoria's Save-On-Foods Memorial Centre as the teams were deadlocked at 2-2 at the end of regulation time.

Canada's Brigette Lacquette tied the game for Canada in the third period with a wrist shot from just inside the blue line during an intense scramble for the puck.

Canada had a two-player power-play advantage for more than one minute and Lacquette's goal came with the Americans down one player, but facing fierce pressure from the Canadians who held possession for much of the penalties.

Savannah Harmon gave the Americans a 2-1 lead early in the third period with a hard shot to beat Canada's Ann-Renee Desbiens low on the stick side.

The first period was scoreless with Hensley making several stellar glove saves as Canada kept the U.S. hemmed in its zone throughout the opening 20 minutes.

The U.S. hit the post with a blast from the point, but Canada dominated much of the period, moving the puck up the ice in waves.

The teams traded goals in the second, with Brianne Jenner scoring shorthanded for Canada early in the period. Jenner had a clear breakaway and scored when she bobbled the puck and it squeezed through Hensley's pads.

Hilary Knight scored on the power play for the Americans with a blast from the right face-off circle the 12:01.

This was coach Troy Ryan's first game behind the bench for Canada after replacing former coach Perry Pearn last month.

"This is my first official head coaching win, so it feels nice," said Ryan, who has previously been the team's assistant coach.

He said the team played a strong first period, slowed somewhat in the second, but managed to keep the pressure on the Americans in the third.

"It was great to win it in overtime," Ryan said.

The teams play next in Vancouver at Rogers Arena in Vancouver on Wednesday. The series wraps up Saturday at the Honda Centre in Anaheim. Calif.

This report by The Canadian Press was first published Feb. 3, 2020.