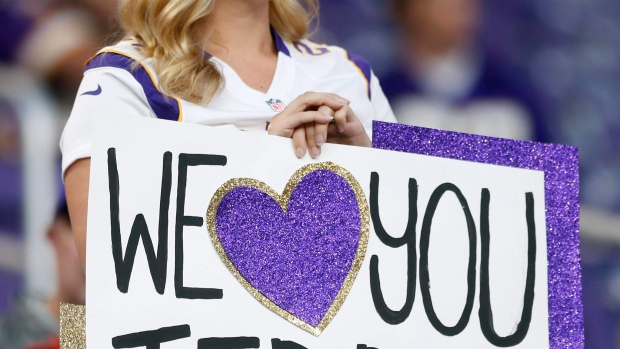 The team issued a statement Friday from director of sports medicine and head athletic trainer Eric Sugarman, revealing that the surgery the day before was performed in Dallas by Dr. Dan Cooper at the Carrell Clinic. The dislocation of Bridgewater's knee during practice on Aug. 30 resulted in a complete tear of his anterior cruciate ligament, accompanied by other significant damage as initially announced by the Vikings.

Sugarman's statement didn't specify what that was, only that more than one of the four ligaments needed reconstruction. Beside the ACL, there's the lateral collateral ligament, the medial collateral ligament and the posterior cruciate ligament. The ACL is damaged more often, but injury to the lesser-known PCL can also be a challenge to bounce back from.

"I don't know all the fancy words. It was what they typically do on a dislocation," the coach said. "I talked to him yesterday and texted him last night, so he's in good spirits."

Zimmer was in relatively good spirits, too, despite losing his starting quarterback 12 days before the season opener. Zimmer again declined to reveal who will start at Tennessee on Sunday, but he said after practice on Friday that he's already decided between Sam Bradford and Shaun Hill.

That's a strong indication that Hill will start, given the 15-year veteran's familiarity with the offence. The Vikings gave both quarterbacks turns with the first team this week, but Bradford has only had seven days and five practices with the team. The coaches have raved about Bradford being a quick study, but if they didn't trust Hill to start a game like this there was no point in having him as the backup in the first place.

"I guess we'll find out on Sunday," Zimmer said.

As for Bridgewater, he's expected back in Minnesota in about a week.

"One of the things he said was he can't wait to get back here and be around the guys, so I'm sure he'll try to be around," Zimmer said, "but the most important thing for him is to try to do the rehab."

Sugarman, who was in Dallas to observe the surgery, said the repair was "excellent" and will give Bridgewater "every reason to be very optimistic" about his recovery.

"Teddy already began the rehab process yesterday, will return to Minnesota to continue on the road to recovery very soon and looks forward to getting back on the field," Sugarman said.

NOTES: Backup running back Jerick McKinnon returned to practice after sitting out on Thursday with a foot injury. He was listed as questionable to play the Titans along with wide receiver Charles Johnson (quadriceps), but Zimmer said McKinnon should be "fine" for Sunday. Backup centre Nick Easton (ankle) and backup tight end MyCole Pruitt (left knee) have been ruled out. ... The Vikings also this week released safety Michael Griffin, who was initially placed on injured reserve with a back injury.