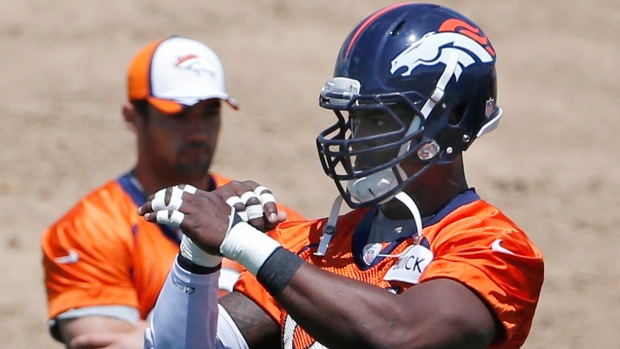 ENGLEWOOD, Colo. - With Von Miller's right knee on the mend and DeMarcus Ware's right elbow feeling fine, Denver's new pass-rushing partners are starting to fantasize about what kind of season they could have if they stay healthy.

Neither man will say how many sacks he'd like to collect individually.

As a tandem, that's another story.

"Between two guys, we want to have as many sacks as one team," Ware declared.

Their aim is higher than that, though.

While emphasizing, "I really don't have personal goals," Ware said he'd love to be a part of the "tandem that was the best in the league ever."

In 1989, Chris Doleman and Keith Millard of the Minnesota Vikings teamed up for an astonishing 39 sacks.

To get into the 30s, Miller and Ware are going to have to have nice bounce-backs from the worst seasons of their respective careers.

The franchise sacks leader in Dallas, Ware was released by the Cowboys this winter in a salary cap move after getting to the quarterback a career-low six times last season and missing games for the first time in his nine-year career with a thigh injury.

He underwent surgery on his right elbow in February, then signed a three-year, $30 million deal with the Broncos, who lost Elvis Dumervil in the infamous fax fiasco a year ago and then watched Miller founder minus his mentor.

Miller and Dumervil teamed for a Broncos tandem record 29 1/2 sacks in 2012, including a franchise-high 18 1/2 by Miller, who slipped to just five in 2013, when his season began with a six-game drug suspension and ended with a torn right ACL in December.

Miller underwent surgery in January and had to watch the Super Bowl from the sideline.

The arrival of Ware, whom he patterned his game after while growing up in Dallas, has inspired Miller, and his long, arduous hours of rehab have led to some reflection and what the front office trusts is more maturity.

"For me, I've got a whole new look on just coming to practice and playing football. If you're not trying to be the best at what you're doing, that just seems lame to me," Miller said Thursday after the Broncos wrapped up their three-day mandatory minicamp. "You just come out here just to play football, just to pay the bills, because it's cool, that's not for me. I want to come out here and try to be the best player I can possibly be, and just be remembered.

"And DeMarcus Ware, he's well on his way to doing that and every time I step on that field, that's what's behind me: To be the best. I know if we keep that same mind-set, we'll be all right."

Just as Ware wants to be the best defensive end in the NFL, Miller said his goal is to be the league's best linebacker.

"I mean, I always wanted to be the best. I don't think I really focused on it as much. I let the sacks and sack dances and all that other stuff kind of take precedence over being the best," Miller said. "It's kind of weird, because when you're making plays, you're doing pretty good. But being the best ... that's what really matters to me now."

That's just the kind of thing coach John Fox will be glad to read. Because he's not all about stats, the sacks or the silly dances that end up on "SportsCenter."

Fox wants to pressure the quarterback, make him throw it a tad quicker than he wants or force him to change his call at the line of scrimmage, even ditch some of what he does best when he lines up against two of the NFL's top edge rushers.

"Mike Strahan, way back the year we went to the Super Bowl in 2000, he didn't make the Pro Bowl because he didn't have the sack total that he had had in the past. But yet he had a very, very productive, good season," Fox said.

"Sometimes people read too much into sacks and sometimes it defines the type of season, which in actuality you can have a very good year without huge sacks numbers. We're just looking for affecting the quarterback and making them uncomfortable."