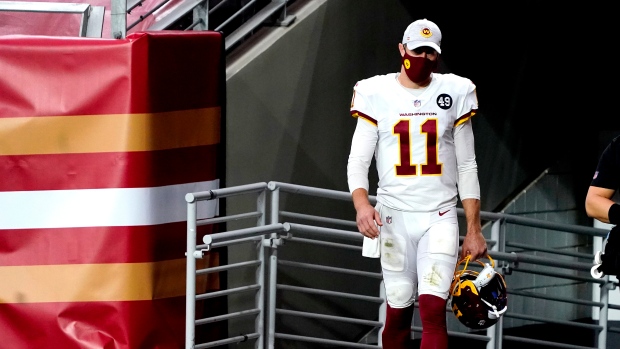 Washington is releasing AP Comeback Player of the Year Alex Smith, a move that was expected but still provides a cold ending to the veteran quarterback's storybook tenure with the organization.

The team informed Smith he's being released, according to a person with direct knowledge of the decision. The person spoke to The Associated Press on condition of anonymity Friday because Smith’s release was not yet official.

Smith's release could happen as soon as Friday. It would clear just under $15 million in salary cap space for Washington, which is hoping to figure out its long-term QB situation and fill many holes in the aftermath of a 7-9 season, NFC East title and wild-card round loss.

Smith made a triumphant return to NFL action last season, two years after breaking two bones in his right leg and requiring 17 surgeries to repair it. His battle against a life-threatening infection and long rehab process to get back on the field became a documentary and an inspirational tale when he was able to play again.

Those warm and fuzzy feelings evaporated not long after Smith led Washington to its first playoff berth in five years. Comments by coach Ron Rivera and new executives Martin Mayhew and Marty Hurney and the financial ramifications of releasing Smith now made it clear he wasn't in the plans for next season as the team looks to find another franchise quarterback.

Smith has indicated he plans to continue playing at age 37. He recently told GQ in his most pointed comments yet that Washington didn't want him to come back from his injury — another indication he knew his future would be elsewhere.

Just three years ago, Smith was Washington's present and future at the position. The previous regime, led by president Bruce Allen, agreed to trade a third-round pick and cornerback Kendall Fuller to Kansas City for Smith and sign him to a $94 million, four-year extension with $71 million guaranteed in February 2018.

Smith had Washington off to a 6-3 start that season before breaking his right fibula and tibia in a home game Nov. 18 against Houston. He was hospitalized for almost a month and had a stabilizer on his leg after he was released.

After an arduous rehab, Smith was back in playing shape by last summer and started training camp on the physically unable to perform list. The 2005 No. 1 pick was third on the depth chart behind Dwayne Haskins and Kyle Allen.

It took Rivera benching and demoting Haskins and Allen getting injured for Smith to get on the field. He made his first appearance since the injury Oct. 11 against the Rams and struggled in poor weather conditions before going back to a backup role.

When Allen injured his right ankle, Smith started at Detroit on Nov. 15 and threw for 390 yards in a 30-27 loss. He won his next four starts before injuring the calf muscle in the same right leg he broke two years earlier and was just healthy enough to lead Washington to a victory in the regular-season finale at Philadelphia to win the NFC East and make the playoffs.

With Smith unable to play against Tampa Bay in the wild-card round, Taylor Heinicke impressed but fell short in a loss to the eventual Super Bowl-champion Buccaneers. While Rivera was noncommittal about Smith being on the roster next season, Washington re-signed Heinicke to a two-year deal worth up to $8.75 million and is expected to bring back Allen.

Washington went 11-5 in games Smith started during his time with the team and 5-26 in games he didn't. He could draw interest around the league by teams looking for a mentor figure who could play in a pinch.

That includes the Jacksonville Jaguars, who hired Smith's college coach, Urban Meyer, to lead their turnaround. The Jaguars have the No. 1 pick 16 years after Smith was taken first by San Francisco and figure to select Clemson's Trevor Lawrence.

Smith has thrown for 199 touchdowns, 109 interceptions and 35,650 yards in 14 NFL seasons for San Francisco, Kansas City and Washington. He missed two full years of his career to injury.