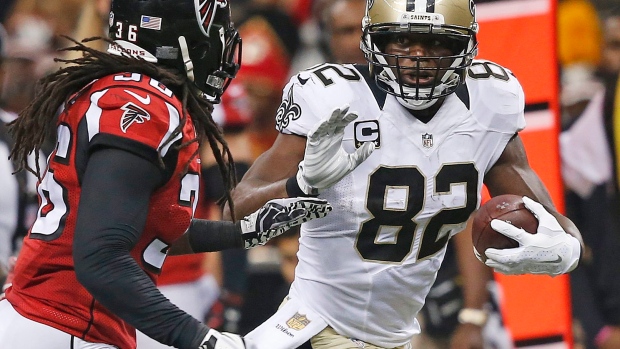 NEW ORLEANS - Ben Watson sank to his knees at the back of the end zone with both arms raised, looked up at the frenzied Superdome crowd and absorbed the adulation.

Drew Brees passed for 312 yards, Watson racked up a career-high 127 yards receiving to go with a fourth-down touchdown catch, and recently reeling New Orleans handed the Atlanta Falcons their first loss this season, 31-21 on Thursday night.

"It felt great. It was really great to see the fans enjoying themselves," Watson said. "We want to win for ourselves and for our families, but to be able to look up at the stands and see people dancing and having fun, it was very exciting for us."

Desperate for a victory, the Saints (2-4) enjoyed big plays in all phases, a common occurrence when New Orleans hosts night games. Including the playoffs, the Saints have now won 19 of their last 21 prime-time games in the Superdome.

Michael Mauti, who grew up near New Orleans after his father, Rich, played for the Saints, blocked a punt and recovered it for a touchdown, delighting the Superdome crowd with a play reminiscent of Steve Gleason's famous block against Atlanta in 2006.

Gleason, now paralyzed by ALS, was at the game, watching from his motorized wheel chair. He reacted with this Twitter post: "Hey, Falcons. #NeverPunt."

"The cool thing was that Steve was here to see that," Brees said. "It brought back some good memories."

"That blocked punt and a couple of turnovers really told the story," said first-year Falcons coach Dan Quinn, speaking after a loss for the first time. "It's hard to overcome those."

Devonta Freeman rushed for 100 yards, including a 25-yard TD, for Atlanta (5-1). Matt Ryan passed for 295 yards and two TDs. He also was sacked five times, including three for defensive end Cam Jordan.

"We made mistakes early on and it cost us," said Freeman, who also turned a short pass into a late 13-yard score. "I feel like we beat ourselves, but they're a talented team and they did a lot of great things tonight."

Freeman's first touchdown cut New Orleans' lead to 24-14 with 13:07 remaining, which seemed like plenty of time for a Falcons team that had already orchestrated four fourth-quarter comebacks this season.

The Saints had other plans, responding with the type of will-imposing drive that was commonplace during much of the decade since coach Sean Payton and Brees arrived in New Orleans, but seldom seen this season.

New Orleans drove 80 yards in 11 plays, eating about five minutes off the clock. During the series, Watson tied a career high with his 10th catch of the game. Brees found Brandon Cooks for 26 yards on a third down. Ingram capped the drive by powering in to make it 31-14.

That wasn't the only example of the Saints' restored swagger on offence. Late in the third quarter, the Saints capped a 10-play, 63-yard drive by first drawing Atlanta offside on fourth-and-goal from the 4, then converting a 2-yard pass to Watson.

"That's a huge momentum-gaining-type play in a game like that, and it took some marbles to call it," Brees said, summing up the night as "validation."

"For it all to come together like that, it just gives us a glimpse of what we can be," he said.

The Saints never trailed, racing in front on the opening series, an 80-yard drive capped by Ingram's first TD.

Mauti made it 14-0 when he smothered Matt Bosher's punt, scooped up the ball as he landed and sprang into the end zone.

Atlanta cut it to 14-7 on Ryan's 7-yard pass to Roddy White, but the Falcons, who outgained the Saints 265 yards to 174 in the half, squandered a pair of promising drives with fumbles. First, rookie Tevin Coleman was stripped by linebacker Dannell Ellerbe and cornerback Brandon Browner recovered on the 9. Later, Ryan mishandled a snap and Ellerbe recovered on the New Orleans 17.

NOTES: Saints kicker Zach Hocker, who missed a potential winning field goal against Dallas two games earlier, missed field goal attempts from 51 and 47 yards. ... Rookie left tackle Andrus Peat, making his second straight start for Terron Armstead (knee), left in the first half with an apparent left leg injury. He was replaced by Tony Hills, who had been acquired a week earlier. Brees was sacked just once.