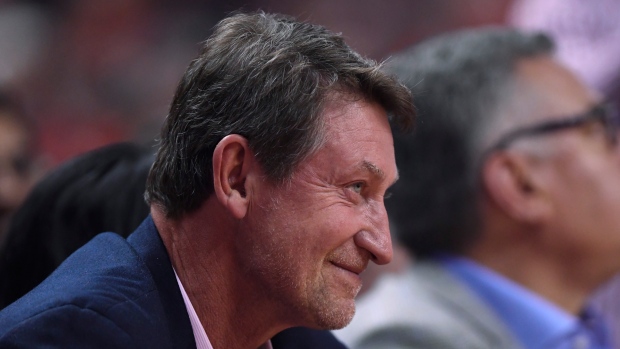 LAS VEGAS — Wayne Gretzky's trade to the Los Angeles Kings in 1988 gave hockey a massive boost of mainstream appeal in the United States.

Now Gretzky is looking to grow Canada's other national sport south of the border.

Nash and Gretzky are part of a group led by principal owner Joe Tsai and including golf star Dustin Johnson. The league's 15th team will start play in the fall of 2022.

Lacrosse is recognized as the national summer sport of Canada, while hockey is the national winter sport. Gretzky played both while growing up in Brantford, Ont.

Gretzky said he was drawn to Tsai's passion for the sport when the billionaire reached out to him.

"You can't replace that sort of go get 'em passion that he has," Gretzky said Monday at a launch event in Las Vegas. "And I think he really wants to grow this sport and help make it fun for kids in the community. For the kids to be able to look up to players and athletes and one day say 'I want to play in that league.'"

Gretzky said he piqued Johnson's interest in a recent trip to Florida to visit his grandkids. Johnson is engaged to Gretzky's daughter, Paulina.

The Las Vegas team will play at MGM Resorts International’s Michelob Ultra Arena, which is inside the Mandalay Bay Resort and Casino. It also is home to the WNBA's Las Vegas Aces.

The team is still deciding on a name, and Tsai said it will be looking for input. Fans can suggest names on the team's website (lasvegaslacrosse.com).

Nash, whose Nets were eliminated from the NBA playoffs Saturday after a Game 7 loss to Milwaukee in their second-round series, was unable to attend the launch event but did send along a video where he talked about growing up in the lacrosse hotbed of Victoria and cheering for the Western Lacrosse Association's Shamrocks.

"Lacrosse has always been a passion of mine, ever since I started playing in grade school, and I have a special connection to the box game in particular" Nash said. "Now I look forward to sharing my love of the sport with you in Las Vegas."

Ownership in the NLL team is the latest venture for Gretzky, who has had a full plate of late. The hockey legend recently took a job as a television studio analyst for NHL coverage for American-based Turner Sports and also accepted a role as brand ambassador for BetMGM, a sports betting and digital gaming company.

"I couldn’t be more excited to have one of the most iconic Canadians ever, Wayne Gretzky, joining an ownership group in our league," said Jamie Dawick, owner of the Toronto Rock. "The NLL’s newest franchise in Las Vegas has put together a great ownership group and I’m sure they will hit it out of the park."

Gretzky and Nash both have experience as sports team owners.

The Rock, Halifax Thunderbirds, Calgary Roughnecks, Saskatchewan Rush and Vancouver Warriors are the five Canadian teams in the NLL.

This report by The Canadian Press was first published June 21, 2021.

Note to readers: This is a corrected story. A previous version said Gretzky was traded to the L.A. Kings in 1998.