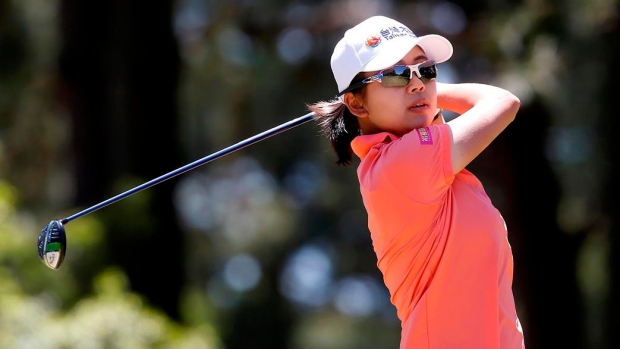 WILLIAMSBURG, Va. (AP) — Wei-Ling Hsu birdied the final hole Saturday for a 6-under 65 and a share of the third-round lead with Moriya Jutanugarn in the LPGA Tour’s Pure Silk Championship.

Jutanugarn eagled the par-5 seventh in a 65 to match Hsu at 10-under 203 on Kingsmill Resort's firm and fast River Course.

The 26-year-old Hsu, from Taiwan, is winless on the LPGA Tour. She had five straight birdies on Nos. 3-7.

“I don’t really think about this much,” Hsu said. “Just try to hit every single shot the place I want to be. And the iron performance those couple hole are really good. Just I put a lot of ball like right next to the pin.”

“Tomorrow is going to be new day and you don’t know what’s going to happen,” Moriya Jutanugarn said. “I’m just trying to keep working on what I’m doing and just go out and have fun, and hopefully it’s going to be a good day.”

Jessica Korda was a stroke back, birdieing three of the last four in a 67. She won the season-opening Diamond Resorts Tournament of Champions for her sixth tour title.

“It was really slow today. It was tough,” Korda said. “The greens are definitely a lot faster than they were the first couple days, so I think it was just hard for me to get really comfortable. So, it was just nice to be able to put a couple birdies in.”

Canada's Brooke Henderson, from Smiths Falls, Ont., is eight strokes off the lead heading into Sunday’s final round after shooting an even-par 71. Hamilton's Alena Sharp jumped 33 spots in the leaderboard with a 4-under 67 and is now tied for 35th.

Lizette Salas shot a 64 to join second-round leader Sarah Kemp (69) at 8 under. Salas won the 2014 tournament.

“Considering I am a past champion, this golf course is playing completely different,” Salas said. “I’m focusing on visualizing my shots better and I’m obviously executing them more. Putts are feeling good. I think overall my confidence is coming back.”