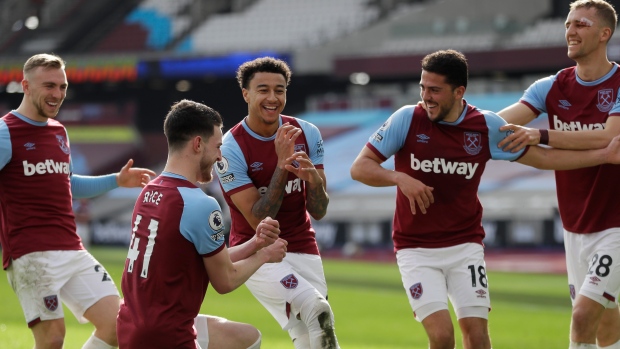 LONDON — With five losses in six games plunging Tottenham into midtable in the Premier League, Jose Mourinho is starting to view the Europa League as his team's route into next season's Champions League.

Still, the coach who once famously described himself as a “Special One” saw no reason to doubt his methods after a 2-1 loss at West Ham on Sunday.

“Because sometimes the results are the consequence of multiple situations in football,” a bullish Mourinho said, "and mine and my coaching staff’s methods are second to nobody in the world.”

It's West Ham manager David Moyes who looks to have the right approach at the moment.

West Ham moved into fourth to strengthen its unlikely push for Champions League qualification after goals by Michail Antonio and Jesse Lingard in another battling win at the Olympic Stadium.

Lingard, rejuvenated after his loan move from Manchester United last month, scored what proved to be the winning goal in the 47th minute after running onto a pass from Pablo Fornals and burying an angled shot with his left foot.

Tottenham had also conceded a goal early in the first half, with Antonio — fit again after his latest muscle injury — converting a loose ball from close range after his initial glancing effort was kept out by goalkeeper Hugo Lloris in the fifth minute.

Lucas Moura pulled a goal back for Tottenham in the 64th with a header from a corner by Gareth Bale, whose impressive performance as a second-half substitute also saw him smash a shot against the crossbar from the edge of the area.

Son Heung-min also struck the goal frame in stoppage time with an effort he knew little about that looped up over West Ham goalkeeper Lukasz Fabianski.

Tottenham dropped nine points off the Champions League positions, the fourth and final one currently being occupied by West Ham as Moyes continues to rebuild his managerial reputation at an east London club that is more often found fighting relegation.

“I feel as if there is a half-job done," Moyes said. "I think we can play much better ... I don’t think we’ve hit top gear yet. The players have been finding ways to wrestle points off the opposition. They have done a brilliant job.”

West Ham has only lost one of its last nine league games, whereas Tottenham is heading in another direction — at least in the league. In the Europa League, Spurs are close to reaching the last 16 after beating Wolfsberg 4-1 in their first leg of the round of 32 on Thursday.

“When a team fights the way the team did until the last second, trying to get a different result, it’s never a group crisis, because groups are in crisis when you’re not together in the search for better results than you have," Mourinho said. “So I wouldn’t say crisis. I would say a bad — a really bad — run of results. That is obvious. We’re losing too many matches.

It was Lingard's third goal in four league games since joining West Ham in an effort to revitalize a career that was going stale at United under Ole Gunnar Solskjaer.

“I have settled in really quickly,” Lingard said. "I am playing each game with a smile and enjoying my football, and that is the most important thing.

“Everyone has the same mindset and goal for the end of the season and the same targets. We don’t look at the table too much and will take it game by game, but this is an enjoyable position to be in.”