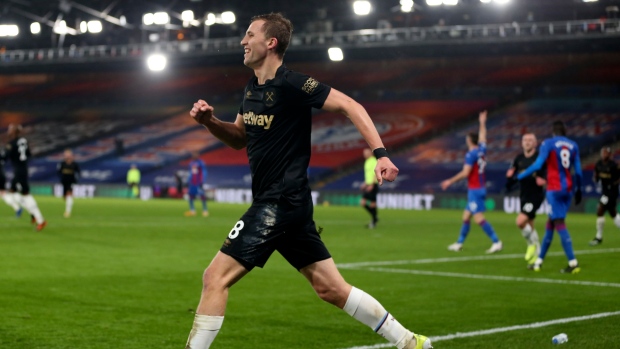 LONDON — Tomas Soucek scored twice to lead West Ham to a 3-2 win at Crystal Palace and fourth place in the Premier League on Tuesday.

The Czech Republic international is proving a solid source of goals for West Ham, having scored seven times in his last 13 league matches despite playing as a defensive central midfielder.

Soucek has a knack of timing his runs into the box to perfection, though, and did so again to equalize in the ninth minute after Michail Antonio lobbed a cross into the centre of the area. That cancelled out Wilfried Zaha's third-minute opener for Palace.

Soucek then gave West Ham the lead in the 25th following a free kick to the back post by Aaron Cresswell, with the goal needing the say-so of VAR because of a possible touch by Antonio, who had been standing in an offside position.

Craig Dawson headed home a right-wing corner from Jarrod Bowen in the 65th, as Palace showed its aerial susceptibility once again.

Michy Batshuayi grabbed a consolation for Palace in the seventh minute of stoppage time.

West Ham moved above Everton, Tottenham and Liverpool, and onto 35 points from 20 games. That is just four fewer points than the team collected in the whole of last season.