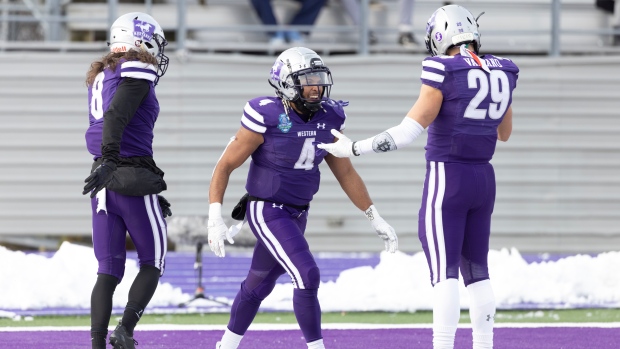 The Western Mustangs and Saskatchewan Huskies advanced to the Vanier Cup in very different ways.

The Mustangs emphatically punched their ticket to the Canadian college football final with a 61-6 rout of visiting St. Francis Xavier in the Mitchell Bowl on Saturday.

Western led 23-0 after the first quarter and 51-3 at the half in front of a home crowd in London, Ont.

The Huskies, meanwhile, outscored the Carabins 13-1 in the fourth quarter to eke out a low-scoring 14-10 victory in Montreal to claim the Uteck Bowl. Adam Machart scored the winning touchdown on a 13-yard run with five seconds left in the game.

In the Mitchell Bowl, the Mustangs did most of their damage on the ground. The X-Men had no answer for Western rusher Edouard Wanadi, who racked up 238 yards and three touchdowns.

Trey Humes also had three touchdowns on 91 rushing yards, and Keon Edwards had 104 yards and a TD.

"We certainly dominated, they struggled to stop our run," Mustangs coach Greg Marshall said. "I thought going into the game that might be the case but I really thought their offence would be a little more productive. Our defence played flat out unreal and just kept getting us the ball back."

Max Capriotti had field goals of 42 and 47 yards for StFX.

In the Uteck Bowl, the Huskies' only scoring was a first-quarter rouge until their offence came alive and their defence held firm in the fourth quarter.

The score was 4-1 at the half, then Montreal, which failed to register a touchdown in the game, went up 9-1 heading into the final frame thanks to a 15-yard field goal from Michael Arpin and a safety.

Saskatchewan scored the first touchdown of the game early in the fourth quarter when Machart hauled in a nine-yard touchdown pass from Mason Nyhus. The Huskies trailed 9-7 after failing a two-point conversion.

“Obviously Machart is a heck of a player and we just need to get him the ball,” said Nyhus.

An Arpin rouge gave the Carabins a tenuous 10-7 lead with 9:36 left to play. But with time winding down, the Huskies marched 83 yards in one minute 50 seconds, capping the drive with Machart's second touchdown of the game.

“I knew we needed it. We didn’t want a tie, we wanted a win,” said Machart, “(The Vanier Cup) represents two years of hard work. We’ve fought so hard for it and now we have a chance to get there.”

The Vanier Cup goes Dec. 4 at TELUS-Université Laval Stadium in Quebec City. Western will seek their eighth title and first since 2017. Saskatchewan won its third and most recent title in 1998. The Huskies appeared in four of the five finals between 2002 and 2006, losing each time.