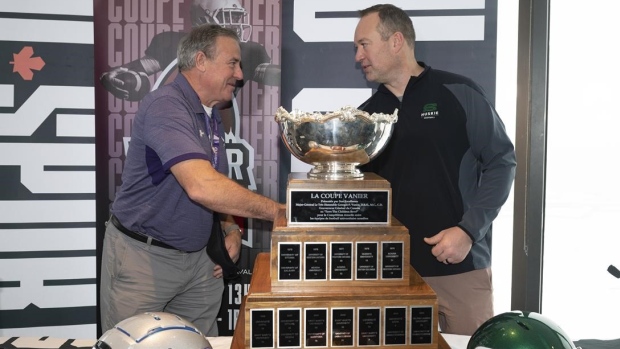 QUEBEC — The Vanier Cup will be a showdown of the two best offences in Canadian university football as the No. 1 Western Mustangs face the No. 2 Saskatchewan Huskies.

But Western head coach Greg Marshall believes that defences could dictate the pace of the championship game on Saturday at Laval University's Stade Telus. Their defences are some of the best in Canada as well, as the Mustangs are second in the country while the Huskies are fifth.

Marshall said he sees a lot of similarities between the two teams.

"They have a great defence," said Marshall, three-time U Sports coach of the year. "They get to practice against a great rushing team everyday, just like ours but their offensive line is very athletic. But ours is one of the best I have ever coached.

“ (Saskatchewan) is battle tested. They went through a hard game last week to get here, and they are built like us, to play winter football”.

Western (9-1) earned its way to the Vanier Cup championship by crushing the St. Francis Xavier X-Men, 61-6 to capture the Mitchell Bowl on Nov. 27.

As for the Huskies (8-1), their offence finally broke out against the Université of Montreal in the fourth quarter by scoring 13 points, including a touchdown with five seconds left, to beat the Carabins, 14-10. The victory gave Saskatchewan their first Uteck Bowl and their first trip to the Vanier Cup since 2006, which was also against Laval.

Huskies head coach Scott Flory thinks his team has not played its best game of the season yet.

“We knew playing in Montreal that it would be tough, but you get there and the sirens, the fans, it was really loud," said Flory. "At the end, our best players made the biggest plays of the game”.

The Huskies will be making their tenth appearance in the U Sports national football championship while the Mustangs will be playing in their 15th title game. Western’s last visit was in 2018, against the Université Laval Rouge et Or.

Western has seven Vanier Cups to its credit while Saskatchewan has three national titles.

Flory said that the hard-fought win over the Carabins could be a boost for his Huskies' confidence, but that it still guarantees nothing at the Vanier Cup.

"We must use that and be at our best for three hours against Western who is a great football team," said Flory, a two-time Vanier Cup champion in 1996 and 1998.

The Huskies and Mustangs have 12 all-stars this season, including seven on the All-Canadian first team. Western receiver Savaughn Magnaye-Jones and centre Elliot Beamer join the MVP of the Uteck Bowl, running back Adam Machart and tackle Noah Zerr of Saskatchewan.

Kickoff is scheduled for 1 p.m. on Saturday. It’s the latest Vanier Cup date in history. The forecasts call for a mixture of sun and clouds, and temperature of -10C.